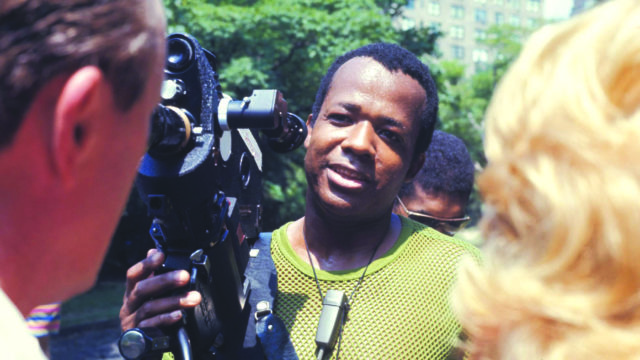 There’s reality, and then there’s everything else. Cinema exists firmly in the latter: Cameras don’t capture reality; they capture a perspective of it with a defined beginning, middle and end. Add editing into the mix, and you’ve got something new no matter how mundane the subject. Think of your friends sitting around in a room chatting. Now whip out a camera and start recording. The mere presence of a camera — of posterity — changes their behavior. What, then, would happen if someone else in the room pulled out their camera and started recording you recording your friends?

That ouroboros alchemy is the heart of William Greaves’ avant-garde films, Symbiopsychotaxiplasm: Take One and Take 2½, out now on Blu-ray and DVD from The Criterion Collection.

Shot in 1968, Symbiopsychotaxiplasm: Take One finds Greaves in New York City’s Central Park with a small film crew and two actors, Patricia Ree Gilbert as Alice and Don Fellows as Freddie. In the scene, Alice accuses Freddie of being closeted and forcing her to have multiple abortions. Freddie defends his position while making sure his secret stays a secret. Sounds simple, right? In another director’s hands, it would be — it would also be trite and more than a little reprehensible — but in Greaves’ hands, it’s something else.

If that sounds like chaos, it is. And it’s what Greaves was aiming for. Born in Harlem in 1926, Greaves started acting in the American Negro Theater before moving on to The Actor’s Studio in 1948. But the lack of black roles in the theater sent Greaves north, where he made a series of successful documentaries for the National Film Board of Canada.

Following the Civil Rights movements of the 1960s, Greaves returned to the U.S. to work on the show Black Journal for National Education Television. As Greaves bounced around, theories about acting, documentary, experimental filmmaking fomented in his mind: from the documentaries of John Grierson to Werner Heisenberg’s Uncertainty Principle to Arthur F. Bentley’s theory of symbiotaxiplasm (all the things in an environment caused by humans). The only thing missing was interiority (psycho), which Greaves dropped into the title for his landmark film: Symbiopsychotaxiplasm.

The intent behind Symbiopsychotaxiplasm was rebellion. Give the actors vulgar dialogue and make them repeat it until they refuse. Give the crew zero direction, and see what they come up with. Greaves shot more than 50 hours of footage, imagining the docu-fiction experiment as a five-part series. Only Take One made it to the screen, and probably for the best. With its multiple narratives, triptych paneling and endless repetition, Symbiopsychotaxiplasm would have grown tiresome over five installments. But at 75 minutes, Take One is as brief as it is dense. It’s a movie you’ll chew on for years to come.

It’s also a movie that could have changed the course of avant-garde cinema but didn’t. When Greaves took Take One to the Cannes Film Festival in 1971, the projectionist jumbled the reels and presented them out of order for the selection committee. As is, Take One is a challenging film. But after a round of reel roulette, it’s incomprehensible.

So Take One sat on mothballs until a retrospective of Greaves’ work at the Brooklyn Museum in 1991 gave the docu-fiction hybrid new life. Steven Soderbergh counted himself as a fan — he dubbed the film “the ultimate ‘reality’ piece” — and helped Greaves make Take 2½ in 2005, featuring Audrey Henningham and Shannon Baker in the roles of Alice and Freddie.

Greaves died in 2014 at the age of 87. He left behind more than 200 documentaries, but none as revolutionary as Symbiopsychotaxiplasm: Take One and Take 2½. The Criterion Collection has bundled both, plus the 2006 documentary Discovering William Greaves, for its latest Blu-ray and DVD release, Symbiopsychotaxiplasm: Two Takes by William Greaves. The set also includes an essay from Amy Taubin and Greaves’ production notes for Take One. For all you cineastes out there, those notes read like Robert Bresson’s seminal Notes on the Cinematograph.

And for those of you still shopping for stocking stuffers for that film lover in your life, look no further.

ON THE BILL:  ‘Symbiopsychotaxiplasm: Two Takes by William Greaves’ is available for purchase on Blu-ray or DVD from The Criterion Collection.