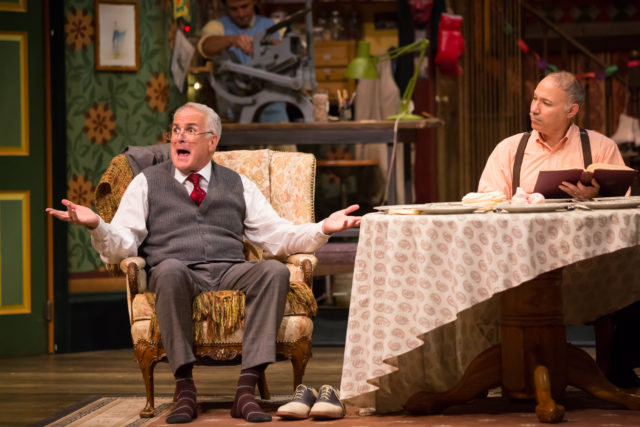 This year’s Colorado Shakespeare Festival (CSF) is a bit of an odd duck. But then, isn’t it always the oddest ducks that quack the loudest?

Only 50 percent of the plays at this year’s CSF were penned by Shakespeare. And no, that’s not an invitation to debate the actual authorship of the plays he’s generally accepted to have written. Put down your Bacon; we’re not heading to Oxford by way of Marlowe for the Derby. It’s merely an observation that two of the four plays at the CSF this year were, without any doubt, written by other playwrights.

The first Shakespeare play of the festival is the lesser-known and therefore less often produced comedy-without-a-happy-ending, Love’s Labour’s Lost. The second of the master’s plays at the 2018 CSF is the history Richard III, and while it boasts some extremely quotable lines, it is, as with all of Shakespeare’s histories, more of an acquired taste than the Bard’s more crowd-pleasing comedies and tragedies.

The third CSF offering this year, Edmond Rostand’s Cyrano de Bergerac, is filled with the doing of der and the buckling of swashes as well as some conflicted and conflicting life lessons. The final CSF show is You Can’t Take It with You, a theater of the absurd comedy set in, of all times, the Great Depression. Thought its title is certainly a truism, the play easily takes the cake as the most entertaining and enjoyable entry on the 2018 CSF slate. Counterintuitive as it may be, the winner of the 2018 CSF is, in fact, not a Shakespeare play.

The Moss Hart and George S. Kaufman-written You Can’t Take It with You debuted in 1936. It was an immediate hit and won the 1937 Pulitzer Prize for Drama. In 1938, the film adaptation won Academy Awards for both Best Picture and Best Director. If you’re lucky enough to get to see Director Carolyn Howarth’s take on this Broadway and Hollywood classic at CSF, you’ll understand why You Can’t Take It with You has endured so easily for so long.

Three generations of unusual free spirits live together under one New York City roof. Grandfather Martin Vanderhof (Sam Gregory) was a successful businessman — which explains how he afforded the rather sprawling manse in Manhattan — until one day, some decades previous, he quit business in the name of happiness. His daughter, Penelope (Leslie O’Carroll), an erstwhile painter, now puts her energy into writing plays. Penelope’s husband, Paul (Leraldo Anzaldua), spends his days making — and testing — fireworks in the basement of the family home.

Penelope and Paul’s daughter, Essie (Chloe McLeod), has spent the past eight years studying under mad Russian Boris Kolenkhov (Rodney Lizcano) to become a ballerina, although to watch her dance it could just as well have been eight weeks. Essie’s husband, Ed (Jihad Milhem), plays the xylophone and delivers Essie’s homemade candy to customers around town. Essie’s sister, Alice (Lindsay Ryan), works as a secretary at a big-time investment firm, and she’s in love with Tony (Christian Ray), the boss’ son.

The will they/won’t they between Alice and Tony serves as the play’s through line. Alice is convinced that Tony’s upper-crust family will never accept her family’s eccentricities, and, sure enough, when the families meet their cultures clash quite calamitously. What elevates You Can’t Take It with You above such a simple plot is its openhanded, almost childlike sincerity. The play, and its characters, aren’t presented ironically or sardonically. Perhaps that’s why this play was such a hit during the Great Depression and why it resonates just as strongly today.

Everything about the CSF’s You Can’t Take It with You works wonderfully. The set by Caitlin Ayer — filled with curios and bric-a-brac, boldly patterned wallpaper, heart-shaped chair backs and stained glass windows — is a character unto itself. The cast is a Murderers’ Row of talent. Sam Gregory does what he’s done for years and blasts past any expectations you might have of him. His Grandpa is the calm center of the chaotic action, and his every moment on stage is a joy. Leslie O’Carroll, another of my longtime favorites, can and does do more with a single look than most actors can do with an entire soliloquy.

On the Bill: You Can’t Take It with You. Colorado Shakespeare Festival, University of Colorado Boulder, www.cupresents.org. Through Aug. 12.