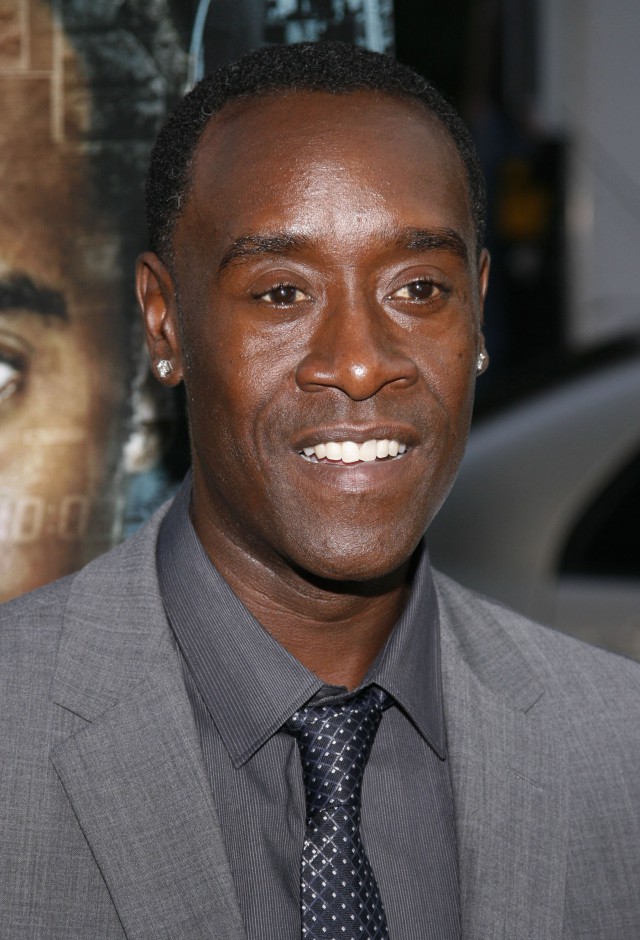 LOS ANGELES — From his Oscar-nominated performance in
“Hotel Rwanda” to his boys-night-out turns in the “Ocean’s Eleven”
franchise, Don Cheadle has regularly earned praise for his diverse
range. But he’s never really gone full monty — until now.

In the opening moments of “House of Lies,” Showtime’s
new comedy about a hard-edged management consulting firm that premieres
Sunday, Cheadle is lying in bed in all his birthday-suit glory next to a
naked woman. The actor knows the sight may catch some viewers by
surprise.

“Well, it even caught me off-guard,” Cheadle quipped. “I don’t want to see that again.”

But he also knows that the opening is a can’t-miss
icebreaker for the series, which fits comfortably within the pay
network’s slate of comedies built around self-centered, often
unsympathetic figures, such as “Nurse Jackie,” “The Big C,” “Weeds” and
“Shameless.” Cheadle portrays Marty Kaan, a smug, foul-mouthed and
razor-sharp head of a firm that, as the producers say, “put the con in
consulting.” Kaan and his team wreak havoc on corporate America as they
prey on huge firms and fat-cat CEOs.

It’s an unusually edgy role for the actor, who is
marking his first starring role in a weekly series. And the fact that
he’s often unscrupulous and cutthroat — even in dealing with his
colleagues — made the prospect of playing Kaan more alluring.

“It’s a lot of fun to play this part,” Cheadle said.
“This guy is a real mess, complicated and contradictory. He doesn’t
always do the right thing. All of those things are fun to play. It’s
provocative adult humor, with a show that pushes the bounds of social
mores and values. “

Making Kaan’s life even more messy is an ex-wife who
is a business rival, and a cross-dressing young son: “Grappling with a
personal life that is in disarray is the karmic debt this guy has to pay
for being in this business.”

“House of Lies” has one of the most eclectic casts in
TV. Also starring are Kristen Bell, who has appeared in a string of
romantic comedies (“You Again,” “Forgetting Sarah Marshall”) after her
stint as teen detective “Veronica Mars”; Ben Schwartz, who has appeared
in comedies such as “Parks and Recreation” and NBC’s defunct
“Undercovers”; and Australian actor Josh Lawson.

“It’s a really interesting group of actors who
attract totally different audiences,” said Showtime Networks President
of Entertainment David Nevins. “The show is a combination of
sophistication and dirty, which makes for a fun cable comedy. There’s
all sorts of stuff going on, and best of all it’s about something —
what’s messed up in corporate America.”

Added Matthew Carnahan, who created the series and is
one of the executive producers: “If anything, we’re hoping to channel a
little bit of the frustration and disappointment that people feel with
big business. It has a punk-rock anarchy.”

Juicing the humor is an acid-laced tone: Much of the
language is crude, and the libidos of the characters are in full bloom
(the first two episodes feature bathroom trysts). The series also has a
catchy gimmick — Cheadle occasionally breaks through the fourth wall
while everything around him freezes.

“It’s a tricky show to do,” Cheadle said. “There’s
all these effects, and it’s very stylistic. We’re trying to do
everything in a short time frame, which is very challenging. Sometimes
we’re figuring out story lines while we’re shooting.”

Producers are also crossing their fingers that
audiences will be able to grasp the show’s humor — even though its
setting is anything but a laughing matter these days.

“It’s the million-dollar question, maintaining that
balance,” executive producer Jessika Borsiczky said. “To me, the most
successful comedy, even if it’s broad, is always based in what feels
real. This show is grounded in the real work, and it gets comical how
these guys have to survive and swim with the sharks.”