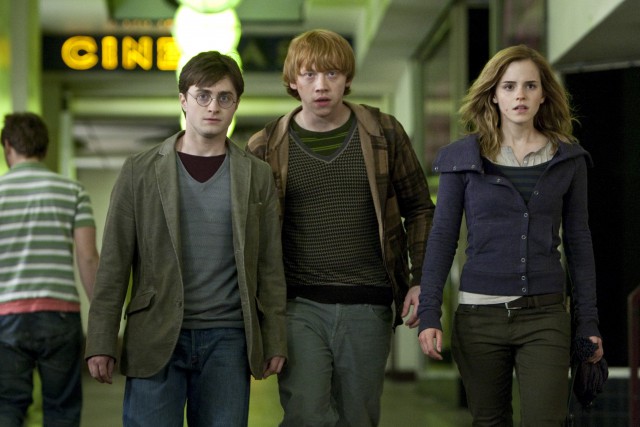 On a sticky June night just outside ,
the magic finally came to an end for the cast and crew of the “Harry
Potter” movies. After a decade together, the small army that has been
the busiest in British filmmaking wrapped the final shoot of the last
“Potter” production.

The green-screen scene featuring the now
world-famous main characters — a trio of young fugitive wizards named
Harry, Ron and Hermione — required actors Daniel Radcliffe, and to hurl themselves onto some off-camera mats to escape danger at the
Ministry of Magic. It was an oddly slapstick finish for such a
monumental franchise — but that didn’t sap the emotion of the moment.

“I admit it, I did cry like a little girl,” said, recalling the day. “There was a feeling that I had, that we all had, that it was the end of something very special.”

Both movies are poised to be global blockbusters —
and may even earn the franchise its first nominations in marquee
Academy Award categories — but the numbers posted by their predecessor
films are extraordinary already.

The six . movies released to date have pulled in at theaters worldwide; home video adds an additional . The seven novels from which they sprang, written by , account for 400 million books sold in 69 languages.

Then there’s the in retail products, a recently opened amusement attraction in , touring exhibits of props and costumes and plans for a permanent exhibit outside .

Still, the true impact of the books and films may
not be fully recognized for a decade or two. With ever-rising ticket
prices, box-office records don’t stand for long, but no franchise has
delivered anything close to eight films in 10 years.

Producer and his team
were able to keep their cast intact — including the young lead stars
who started as adolescents and grew into young adults with millions in
the bank, and no scandals. The movies arrived even as the audience for
Rowling’s books grew, creating a unique synergistic effect. The
“Potter” movies have earned . more than in profit — and the admiration of industry rivals.

“The books and movies fed each other brilliantly to become these commercial tidal waves,” said veteran literary agent , of International Creative Management, who has no connection to the books or films.

Former Walt Disney Studios Chairman , who launched his own mega-franchise with “Pirates of the Caribbean,” agreed that “Harry Potter” has been a breed apart.

“It has unequivocally been the best-managed
franchise that we’ve ever seen, top to bottom,” he said. “The movies
have been terrific and . managed to position
each one as a worldwide event. Each movie has been unique and built on
the last one and the anticipation has never been better. They’ve
honored the source material and done everything right.”

And, unlike, say, “The Lord of the Rings” trilogy,
the “Potter” movies adapted a living, breathing literary sensation
whose ending was unknown. Rowling would visit the set and sometimes
whisper to actors hints of their characters’ destiny, but screenwriter , who penned seven of the eight scripts, said no one really knew how everything would conclude.

The entire exercise, he said, was a “10-year
tightrope walk … and something that will never be done again for the
simple reason that you won’t see another come along.”

The rags-to-riches story of Rowling seems as unreal as the world of dragons and goblins she created. (“J.K.” was manufactured by a publishing executive who thought a
gender-neutral author name might sell more books to boys) was a single
mom in , getting by with the help of welfare, when she finished “ and the Philosopher’s Stone,” her first novel.

In late 1997, a copy of the book found its way to Heyman’s
office but ended up on a shelf for low-priority leads. A curious
secretary took it home for the weekend. Her enthusiasm prompted Heyman
to get past what he has called “that rubbish title,” and the story
captured his imagination.

“The funny thing is with all of the magic, all of
the wizardry, what really makes the ‘Harry Potter’ stories work are the
characters,” he said. “The fantastical elements and the action are
wonderful, but the characters are what people remember.”

Heyman sent the book to his friend and fellow , a production executive at ., to gauge the studio’s interest. Wigram said some in
questioned the viability of the creaky fantasy-adventure genre and
viewed the tale of a magical boarding school called Hogwarts as too
British for the American heartland.

“Don’t spend too much on it,” was the word from the home office, Wigram recalled.

. secured the rights for four “Harry Potter” novels for about . At that point, only the first book was on shelves in and none had reached America. . tried to get a financial partner on the project, reaching out to studios including , which passed.

Once the books became a sensation, greenlighting the first “Potter” film became a major priority at ., where had recently taken over as president and as chairman (replacing longtime studio chiefs and ). circled back and proposed a partnership, but Horn wisely declined. There was one aspect of the talks that did intrigue him, however.

“I did think it would be worthwhile for to direct,” said Horn, who offered it to the filmmaker. Spielberg,
though, opted to take on Warner’s 2001 sci-fi film “A.I.: Artificial
Intelligence.”

, director of “Home Alone” and “Mrs. Doubtfire,” was then tapped for the job. Initially, Rowling wasn’t high on the idea.

“She did not know work and she had some trepidations,” Horn said. “She thought perhaps it
should be a British director.” But after Columbus’ first meeting with
Rowling, during which they visited the coffee shop where she wrote part
of the first book, she was convinced.

“We really hit it off,” said Columbus, recalling
they had similar tastes in books and agreed that “Revolver” was the
best Beatles album. “She’s got a wicked sense of humor and was youthful
and hip.”

Horn, however, was haunted by an interview he heard
Rowling give in which she said she treasured the way readers used their
imaginations to fill in the specific sights and sounds of the Potter
universe. She worried that the studio might limit the magic.

“She expressed some ambivalence, even regret at
having sold the motion picture rights,” Horn said. “I made a little
secret pledge in my mind to Ms. Rowling — and I had never met her at
the time — that just as the books represented the very finest in
literary quality and created this phenomenal classic, my job is to have
you be proud of the cinematic interpretation of those works.

“I completely identified with her fears: ‘Oh no,
what are these movie people going to do?’ And we discussed a lot of
alternative ways to do this but the common thread was that whatever
Hogwarts looked like, it would be of the highest-quality production …
with the very best people we could find on the planet and we would
consult with her every step of the way. “

Warner named executive
vice president for global brand management and her defining duty was to
represent Rowling’s interests, unify the studio approach to the brand
and serve as quality control. The post made her, as one industry peer
described it, “the midwife to the Potter success story.”

Horn, who will step down next year just months
before the last “Potter” film is released, has put Nelson in a similar
but broader role with the DC Comics properties (among them Superman,
Batman, Wonder Woman and Green Lantern) that are seen as lifeblood for . after “Potter.”

All this is not to say that the ride for “Potter” in has been entirely smooth. The sixth film was abruptly postponed for eight months, for instance, when . decided a summer release would be more profitable. Fans howled in protest.

And despite advertising that the seventh installment
would be in 3-D, the studio changed its mind at the last minute after
it became clear to Horn, Heyman and director that they’d have to sacrifice quality to get the conversion done on time.

“When people look back, they remember the smooth
parts and the success,” Nelson said. “But there were plenty of moments
of anxiety.”

There was intense debate about casting, too, in the
early days. Watson was an instant lock for the brainy Hermione, but
filling the title role was more daunting.

Heyman had met Daniel Radcliffe’s parents at a play
and encouraged them to bring their boy for an audition. Heyman
championed the 10-year-old, but not everyone was convinced. Horn said
there was a huge debate and another boy was “very, very close.”
Ultimately, it came down to four actors, including , who would end up portraying Potter’s nemesis, Draco Malfoy.

, now 21, spent half his life as the boy wizard and is eager to move on to new roles. In the spring, he will star in a new
production of “How to Succeed in Business Without Really Trying” and
his film projects include a remake of “All Quiet on the Western Front.”
Still, it’s hard to say goodbye.

“It’s weird to not have another ‘Potter’ film to
work on,” he said. “We know we won’t have anything like this again.
It’s not something that happens twice in your life.”

Why has “Potter” been so successful?

Ultimately, said Wigram, now a producer at ., is “the greatest wish fulfillment” story ever told. “The genius of was she grounded the wish fulfillment of a real kid who has magical
powers in the context of the real world so it was incredibly believable
and you enter the fantasy with her,” he said.

It may prove premature, though, to talk about “Potter” in the past tense. Appearing recently on show, Rowling, 45, sounded as if she were softening her stance that she had closed the book on the wizard epic.

“I could definitely write an eighth, a ninth book,” she mused. “I think I am done. But you never know.”