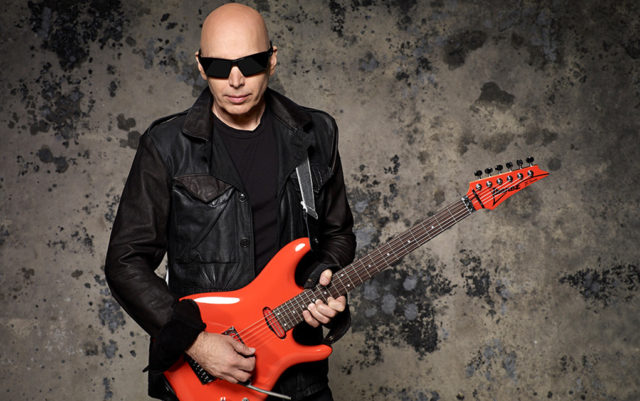 Guitar great Joe Satriani remembers a random encounter he had with the late comedian Robin Williams that illustrates, at least to an extent, a process Satriani’s gone through in evaluating his public and private personality traits over the past few years.

Living near an elementary school in San Francisco at the time, Satriani and his wife were in their garage one morning.

“We hear what sounds like an absolute crazy person walking up the street. It really sounded like a crazy, deranged person, right?” Satriani recounts. “So we kind of froze and looked and we were waiting for this person to come into view.

“All of a sudden who comes walking by, but it’s Robin Williams walking his son to school. Of course, he’s entertaining his son like you’ve seen him in movies and television shows,” the guitarist says. “It reminds me that he was such a wonderful person and a great performer, but I suppose there wasn’t a line there. If he was doing that at 7:30 in the morning with his son just to put a smile on his son’s face, that’s pretty remarkable. So it comes to mind when I think about that whole thing about performers have two lives, one for home and one for the stage.”

For many years, Satriani saw a marked difference in who he was in private and how he tried to come across on stage.

Like many musicians, he was quite shy when he first started touring. To help him come out of his shell, over the years Satriani developed a series of on-stage personas — the latest he named Shockwave Supernova — that allowed him to be a flashier performer who embraced stunts like playing the guitar with his teeth in order to entertain audiences.

But especially in making his 2015 album, Shockwave Supernova, and then touring to promote that release, Satriani began to question whether his persona was overtaking him. The concluding song on that album, “Goodbye Supernova,” hinted at the emerging conflict. And then Satriani got to further examine his alter ego when his son, ZZ, joined the tour to film a documentary, finding his father at a place where he was trying to reconcile his on-stage persona with his natural traits and personality.

In the end, Satriani found a way forward.

“I think one of the things he (ZZ Satriani) discovered is it wasn’t so much a discarding of an alter ego as it was me accepting that it was really part of me all along,” he says.

Satriani put his decision to express a truer version of himself into practice in writing for his newly released 16th studio album, What Happens Next.

Recruiting Red Hot Chili Peppers drummer Chad Smith (who also plays with Satriani in the side band Chickenfoot) and bassist Glenn Hughes (of Deep Purple fame) to form his studio band, Satriani dispensed almost entirely with the progressive rock influences and science fiction motifs that had flavored his past several albums and pursued a sound rooted in rock and soul. This pushed Satriani to look more inward and use his songs, which remain all instrumental, to express more basic human emotions.

The result is a potent album with songs that are more concise and direct in their emotions. Several songs, including “Energy,” “Catbot” and “Headrush” are among the hardest rocking — but still catchy — songs Satriani has created. At the same time, tunes like “Smooth Soul,” “Righteous” and “Forever and Ever,” dial back on the voltage and showcase a more fluid and highly melodic feel that draws strongly from soul and rock, bringing a nice balance to the album.

Now Satriani is embarking on upwards of two years of touring. The first round, behind What Happens Next, will find Satriani joined by Dream Theater guitarist John Petrucci and Def Leppard guitarist Phil Collen for the latest edition of his G3 tour. Each guitarist will play a set running 45 minutes to an hour and then the trio will perform together to finish the night.

Satriani said he plans to showcase several songs from What Happens Next in his set, along with fan favorites from his back catalog. And given the changes he has gone through in reconciling his Shockwave Supernova persona and his real personality, will audiences see a different kind of performer when Satriani hits the stage for his G3 sets? Even Satriani isn’t sure.

“I’m curious to see what happens,” he says. “But my guess is I’ll probably hit the stage with renewed excitement and maybe I’ll go even further with the performance. I know that period of laying myself open, allowing myself to be sort of dissected during the filming of (the ZZ Satriani documentary) Beyond The Supernova, really was a healthy thing. It helped unlock the emotions to create a new album, finish it and then feel comfortable to prepare to bring it out on tour. All the things that seemed to be part of the pathos behind the Shockwave Supernova character were somehow excised during that whole process. So I’m looking forward to it, like it’s the final step. It should be very interesting.”