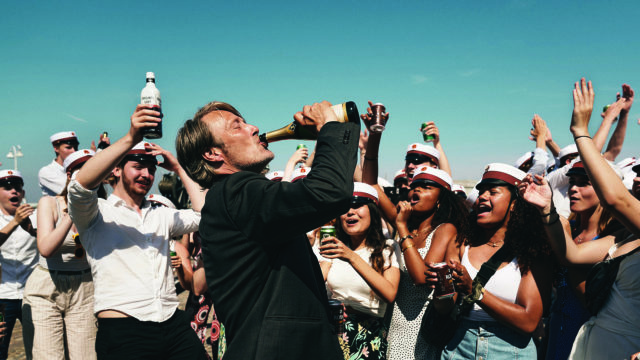 Martin has been immobilized. He’s only 40, but the life drained out of his face years ago. His wife barely talks to him, and his high school students arrange a parent-teacher conference to tell him he’s terrible. While at a colleague’s birthday dinner, Martin is described as banal. “I think you lack self-confidence,” the friend says. “And joy.”

Martin is played by Danish actor Mads Mikkelsen, a performer who can convey rugged sexuality and intellectual sophistication simply by being. Here, he’s a doormat reduced to tears. Around the table are his only friends: Nikolaj (Magnus Millang), Peter (Lars Ranthe) and Tommy (Thomas Bo Larsen). They’re not doing much better, but they all seem happy. That’s because they each have a glass of Champagne in their hands — 2013 vintage with minerality so bright, it’ll transport drinkers to ripe vineyards in France. Martin has a tumbler full of sparkling water with lime: a dead-end drink.

So, Martin starts to drink. A lot. They all do. One of the friends recalls Norwegian psychiatrist Finn Skårderud’s theory that humans are born with a 0.05% blood alcohol deficiency. What if they got their booze on and maintained a 0.05% BAC level throughout the day? There’s some slurring in their speech, and they can’t drive home from work, but the positives are undeniable. Martin becomes a much more engaged teacher and a better lover, and Tommy turns out to be a pretty decent soccer coach. Peter and Nikolaj also see improvements. Well, if life is good at 0.05%, what about 0.08%? 0.12%? Is there a limit? If so, what does that look like?

Alcoholism, my friend. As the saying goes: One drink is fine, two are too much and three is never enough. And Another Round goes there, but not in the manner you might expect. Written and directed by Thomas Vinterberg (who co-wrote the script with Tobias Lindholm), Another Round opens with hoards of Danish teens drinking to excess in the name of cultural tradition. Their binge habits are inferred three more times in the narrative, suggesting Vinterberg and Lindholm may have more on their minds than middle-aged men leading lives of resignation. Curiouser still, Vinterberg and Lindholm suggest that while alcohol might be the cause of some problems, it is also the solution. It crumbles defenses, opens up emotions, alleviates anxiety, narrows the focus and creates community. And that’s all Martin and company wanted in the first place, wasn’t it?

Maybe. Another Round is a really good movie with a questionable conclusion, but you should expect nothing less from the cofounder of the cinematic movement Dogme ’95. The other cofounder is Lars von Trier, a mischievous filmmaker with dubious assumptions if ever there was one.

Vinterberg is the more reserved of the two, even if his movies find chaotic waters and question stability at every turn. That’s a pretty good way to stir up debate. And you know what goes best with a good debate, don’t you?

ON THE BILL:  ‘Another Round’ opens at CU-Boulder’s International Film Series virtual theater on Dec. 4.