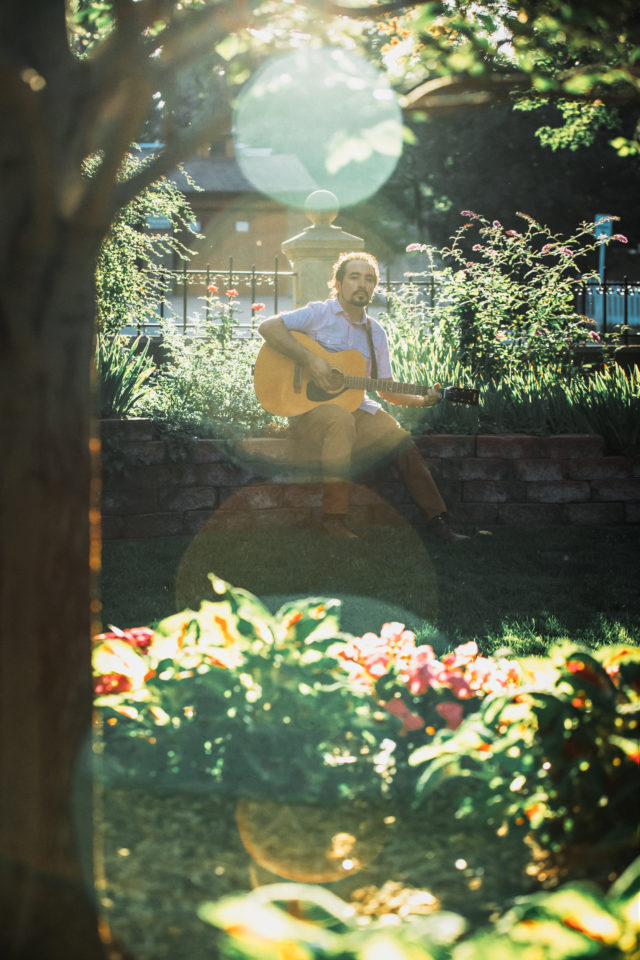 On his way back from his honeymoon on Vancouver Island in 2018, Antonio Lopez picked up a copy of the “local alternative rag,” The New Agora. Miles above the earth, his wife at his side, a new chapter of his life unfolding, Lopez happened upon a quote by Johann Wolfgang von Goethe:

“There are only two lasting bequests we can hope to give our children. One of these is roots, the other, wings.”

“It really just hit me in the gut,” Lopez says over Skype from his home in Longmont, acoustic guitars flanking the wall behind him. “That’s where the idea for this album came into play, Roots and Wings, just really wanting to honor my family first and foremost.”

As a Chicano, Lopez’s roots run deep in Colorado, stretching from his family home in Alamosa, in the San Luis Valley, up north to Boulder. His mother was a school teacher, his father, Francisco “Kiko” Martinez, and uncle, Reyes Martinez, both attorneys who actively worked to amplify and protect the voices of Mexican Americans during the Chicano Civil Rights Movement in the 1960s and ’70s.

The movement was strong in Colorado. In 1969, students at West High School in Denver walked out in protest of racial discrimination by teachers who shamed students for speaking Spanish and intentionally mispronounced their names. Denver activist Rudolfo “Corky” Gonzales founded the group Crusade for Justice to help fight for Chicano rights. The FBI considered the group to be radical. In response, the agency formed a secret branch called COINTELPRO (COunter INTELligence PROgram), aimed at infiltrating and disrupting domestic social movements like the Black Panthers, the American Indian Movement, the Weathermen and Crusade for Justice.

Tension built into the ’70s, reaching a fever pitch on May 27, 1974. At 9:47 p.m., a car parked near Chautauqua Auditorium in Boulder exploded, shaking buildings for miles around. The explosion instantly killed the car’s three young occupants, all of them Chicano activists, including Lopez’s uncle, 26-year-old Reyes Martinez. A second bomb went off on 28th Street two days later, killing three more activists and maiming another.

There is much speculation around the FBI’s possible involvement in these bombings — neither case has been solved, now nearly 50 years later. (In 1975, a U.S. Senate Committee — the so-called Church Committee — found that COINTELPRO, along with programs run by the CIA and NSA, were not only outside the bounds of the American legal framework, but also far outside the bounds of human decency.)

But one thing cannot be disputed: The lives of six families, including Antonio Lopez’s, were forever changed.

“When that bombing at Chautauqua Park happened in 1974, my dad was in exile during that time; he was in Mexico,” Lopez says. “[The FBI] had pinned some unfounded charges on my dad (forcing him to give up his law license for several decades). My uncle was just months older than my dad, so my dad just really, really idolized his brother. Even though it happened before I was born, I choose to talk about this history with this album because I feel like the past really informs the present and without unpacking the past, we just carry around a lot of baggage.”

Lopez’s words carry particular weight in this moment in American history as we collectively unpack our history of racism, sexism and classism, all while dealing with the whims of an incompetent con man who stumbled into the highest office in the country. America paved the way for Trump by refusing to unpack its past.

“I don’t consider myself super political, but I do consider myself politically conscious and conscientious,” Lopez says. “I see my role as a musician as being a bridge builder in a world that’s so divided. I see music as a unifying force that’s able to bridge the gaps between racial, economic and cultural divides — music is that common ground. It’s the meeting point. It’s a place where we’re able to share who we are, but also put aside who we are and just be vulnerable and open. So that’s what I’ve felt a calling for in these last few years in the lead up to this album.”

Roots and Wings, set for release Jan. 1, 2021, is built around the accessible folksy sounds and layered lyrical musings that have made Lopez a fixture in Boulder County’s music scene since he moved here in 2012. The first single, “Going To The City,” captures both his roots and wings — his past and his future — as he recounts his migration from Alamosa to the Front Range while also mourning the urbanization of the planet:

Further up north / More scars upon the land / Zeros and ones / Replace the heart and the hand / Is this a plot twist, or is it part of the plan? / To grow further from nature is the nature of the man

The song, at first a young man’s idyllic dream of moving from a small town to a big city, eventually gives way to the inner reckoning of a conscientious adult. Lopez knows he’s both part of the problem and part of the solution. We all are.

“Everywhere has its pros and cons,” Lopez says, “but I feel like it’s natural for humans to gather. Society arises out of humans’ innate need to communicate with each other. And it’s natural for humans to gather, share ideas, work together. And in this lifetime, we’re going to be facing our biggest challenges — climate change, loss of biodiversity, overcoming systemic racism… that list goes on and on. But humans have a lot of ingenuity, so if we’re able to work together and not apart, we can overcome these obstacles, and in the process we can transform society and aid in the flourishing of both humanity and nature.”

While the album touches on the existential dread we can all feel in the face of an uncertain future, Lopez sees Roots and Wings as a message of hope, and its release date plays into that.

“I don’t think everything’s going to magically change on January first, but I do think there’s something about the human spirit, the changing of the seasons, the changing of the calendar year — there are these mental reboots. And I’m hoping that this album could hopefully play a part in making 2021 a better year for people — a soundtrack to start a new year.”

In the collection is a tribute to Lopez’s friend, Tetsuko of Cold Mountain, a former member of the Shambala Buddhist community in Boulder who Lopez met after Tetsuko moved to the San Luis Valley. Though confined to a wheelchair, Lopez says Tetsuko’s “optimism and spirit were amazing.”

“Being from a small town, there is a lot of culture that I was just not exposed to, so I had some really interesting conversations with her,” Lopez says. “She told me about this prophecy about a new warrior.”

Tibetan legend says the Kingdom of Shambhala rises when the world is in danger of annihilating itself through greed and corruption. These warriors have no uniform, no insignia, no weapons.

“What I love about it is it’s not this warrior savior who’s going to come save us,” Lopez says. “It’s this warrior quality inside each and every one of us. And we all need to step forward in that spirit. It’s a warrior who uses compassion, who uses insight, understanding, listening.

“I think it really speaks to the times we’re in right now, when there’s a lot of division and a lot of turmoil.”

Lopez sings the chorus of the song:

The weapons that we will / Our compassion and insight / It’s not a battle between the good guys and the bad guys / We all contain the shadows and the light.

As we take a deep breath in the wake of the election, 77 million of us relieved, 71 million of us dismayed, Lopez’s words feel like a sacred mantra for the coming days.

ON THE BILL: “Going To The City,” the first single from Antonio Lopez’s upcoming album ‘Roots and Wings,’ is out Nov. 12.  The full album is out Jan. 1, 2021. Follow Lopez on Spotify, Bandcamp, Tidal or wherever you get your music,
antoniolopezmusic.com.