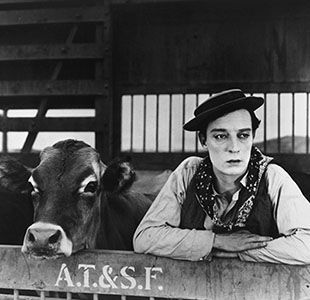 When Keaton traveled, he sauntered, adorned by his flattened pork-pie hat and too-short tie. Dubbed “The Great Stone Face,” Keaton played his expressions close to the chest and let his magnificently rubber body carry the work. His aloof nature sometimes works for him, sometimes against him, but Keaton, for better or for worse, never changes. He keeps chugging along, and eventually things work out. Then he takes another header into the dirt. Sometimes he goes down hard, sometimes he falls in sections. Sometimes he falls like rubber, other times, stiff as a board. No matter how, always that same stone face.

Go West, screening Wednesday, July 23 as part of The Chautauqua Silent Film Series, is a magnificent display of Keaton and his acrobatic qualities. Seeking money and work, Keaton’s character, Friendless, sells off all his earthly possessions and heads west to a ranch in Arizona. Unfortunately, Friendless makes for a pretty lousy cowboy. He doesn’t know how to milk a cow, can’t secure a saddle to a horse and uses a lady’s garter gun as his weapon of choice. His only friend is “Brown Eyes,” a cow that loyally follows him around after he removes a rock from her hoof.

The cowboys are tasked with moving the cattle from the ranch to the stockyards of Los Angeles. While in transit, the train is hijacked, but by luck of the draw (or fluke), Friendless — and only Friendless — escapes with the cattle in tow. This leads to an excellent set piece where Keaton leads 1,000 cows through downtown L.A. To say it causes a disruption is an understatement. This gives Keaton all the set-up he needs for endless amounts of jokes, all culminating into a crescendo of mayhem as the fire department hoses down the police department (and onlookers) while Friendless — dressed as the devil — rides Brown Eyes through the street. You have to see it, words simply can’t do it justice.

Joseph Keaton was born Oct. 4, 1895 and made his vaudeville stage debut three years later. He claimed that Harry Houdini gave him the nickname when he exclaimed, “That was a real buster!” after baby Keaton fell down a set of stairs without a peep. The tale was likely invented by Keaton, but the fact remains, Keaton really could take a buster. He survived the abuse of vaudeville and once motion pictures came into popularity, he found a new home to fall down in and started a career in Hollywood. IMDB lists him with 147 acting credits between the years 1917 and 1966, with a large portion of them being directed (either credited or not) by Keaton as well. Keaton was quick to exploit the sheer size of the movie screen and kept his facial expressions to a minimum, no matter how dramatic the fall, and it made him one of the greats. These subtle expressions do not show well on the small screen, but lucky for you, Chautauqua Auditorium is just the place to experience the majesty that was Buster Keaton.