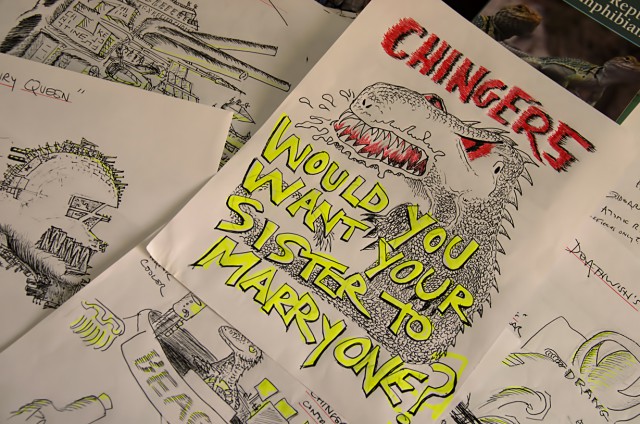 While discussing his ambitious new project — “the biggest student film of all time” — director, screenwriter and University of Colorado assistant professor Alex Cox brings up an interesting point about anti-war movies. More specifically, about the lack thereof.

“It’s hard to make antiwar films,” Cox says. “People don’t really want to make them. You can be ambiguous about war.”

Cox should know. The director of Repo Man and Sid & Nancy has been trying to make an unequivocal anti-war film for 30 years, to no avail. The movie is Bill, The Galactic Hero, based on the Harry Harrison science fiction book of the same name. After Cox made Repo Man, he found himself with “a little bit of money left over,” and he optioned the movie rights from Harrison. However, he couldn’t find enough money to make the film, so he shelved the project.

Thirty years and around a dozen feature films later, Cox hasn’t forgotten about Bill. It seems that being at the University of Colorado has offered him a unique chance at finally making the film a reality. Surrounded by scores of free labor, he figured, why not make Bill, The Galactic Hero come to life as a student film?

Cox has it all worked out. By using the resources around him at the university, he is confident he can make Bill, The Galactic Hero with an all-student crew and keep his artistic intentions intact. The aerospace engineering department has mock spacesuits and a space shuttle they use in simulations that Cox will be able to borrow for the film (he will need to procure 20 such suits in order to shoot the film, he says). He wants to poach actors from the theater and dance program, a design team from the art department, and film students to handle the camera work and editing.

Harrison wrote Bill, The Galactic Hero as a “riposte” to Robert Heinlein’s Starship Troopers, which Harrison saw as unforgivably pro-military, Cox says. Like Heinlein, Harrison was a World War II vet, but he emerged from the war with a bitter taste and soured view of the military.

“The whole idea is that you can only vote in [the Starship Troopers universe] if you’ve actually been in the army,” Cox says. “So it’s a very narrow interpretation of the height of human civilization.”

Even given the bevy of resources available to him, Cox still lacks one thing: money. To this effect, he is starting a Kickstarter campaign (http://bit.ly/BillHero) to raise $100,000 to fund the film’s production. Fundraising began March 22, and as of press time, the campaign had already garnered more than $31,000 in donations.

Supervising the students will be a slew of industry professionals. Sound designer Richard Beggs, who worked on Apocalypse Now, some Harry Potter movies and some of Cox’s films, will help with the audio. Composer Dan Wool, a longtime Cox collaborator, will help with the movie’s soundtrack. Special effects gurus from Tippett Studios and Collateral Image will lend wisdom to the CGI side of things, and two cinematographers, Tom Richmond and Steve Freidberg, will pitch in.

In an ironic twist, the producer of Starship Troopers, Jon Davidson, has agreed to lead the initial pre-production meeting, Cox says.

“Years ago, we were trying to do a film called Mars Attacks, based on the bubble gum cards. That was our project, but we could never get it on. Tim Burton ended up directing it,” Cox says of his relationship with Davidson. “But we always remained in touch. We did a film together about five years ago called Searchers 2.0, and so he’s agreed to come out and sort of be the producer spirit.”

As Cox admits on the Kickstarter page, the dangers of funding such a venture are two-fold: that the film might not be completed, and that it might be bad. The former seems unlikely, Cox says, given his decadeslong career as a filmmaker in Hollywood and elsewhere, and the latter has a few things working against it. Chiefly, the project has the blessing of the book’s author, Harrison. He and Cox worked together on the screenplay before Harrison’s death in August 2012.

“Harry read about two-thirds of the script. Then he went to his reward, and I finished it,” Cox says. “It’s done and it’s ready to go, ready to be made.”

The project will hopefully complete the circle for Cox and bring some closure to the 30-year project. But he also hopes to make that rarity of films these days, an unabashedly anti-war one.