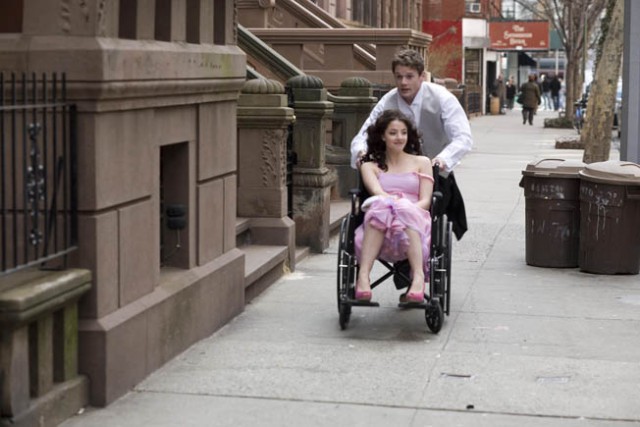 The simplest thing you can say about the movies is that they take you places, geographically, emotionally, hypnotically, and the ongoing “Cities We Love” project that began three years ago with Paris, je t’aime continues its global exploration with New York, I Love You.

Eleven directors and no fewer than 16 screenwriters contributed to the omnibus affair. I like the idea of the film more than the film itself; the batting average with the Paris project was a good deal higher. Nonetheless, New York, I Love You provides some compensatory satisfactions, thanks mostly to the actors as they make the most of a series of pencil sketches.

The best of these shorts (typically shot in two days’ time) treat New York through the eyes of both a tourist and a native, allowing two disparate characters to connect, in their way, before moving on with their lives. In director Mira Nair’s story, an Indian jeweler (Irrfan Khan of Slumdog Millionaire) negotiates the sale of a diamond with a Hasidic Jew (Natalie Portman, who also wrote and directed a segment of her own). The initial dialogue, as is often the case with New York, I Love You, would be roughly as effective on a stage, or in an acting class. But as Nair crosscuts between the jeweler’s fantasies and the bride’s wedding, the literal becomes more poetic and far more interesting.

Similarly: In the atmospheric one-night-stand anecdote directed by Allen Hughes, Drea De Matteo and Bradley Cooper play New Yorkers who recently met, recently slept together and now wonder what, if anything, they have to build on for a second date. Hughes’ film isn’t trying to say anything about anything, really. Yet its mood of tousled reverie, and the elegance of its intercut voice-overs and single shots following the two characters traveling to their agreedupon meeting place, adds up to a lovely miniature. De Matteo in particular wrestles with several competing emotions, eloquently.

It’s too bad more of the segments can’t hit this level of interest. (I’d add the Anthony Minghella-scripted, Shekhar Kapur-directed memory vignette, starring Julie Christie, John Hurt and Shia LaBeouf, in the plus column.) At least half the vignettes demand that you focus on your appreciation of performers as diverse as Chris Cooper, Robin Wright Penn and Maggie Q, and what they bring to conventional material. For a movie about a dizzyingly multiethnic place, New York, I Love You is a little on the vanilla side. But some of it is pretty tasty.

These pictures of you