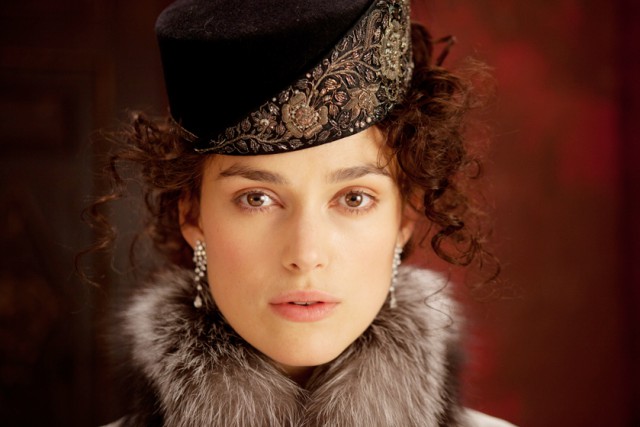 Tolstoy’s classic novel of love and infidelity, Anna Karenina has been brought to stage and screen many times, often with mediocre results due to its complexity. Pay attention: It’s mid-1800s Russia, and Anna (Keira Knightley) is married to Karenin (Jude Law), a dull but faithful St. Petersburg public servant. When her brother Oblonsky (Matthew Macfadyen) has an affair, Anna travels to Moscow to try to prevent her sisterin-law Dolly’s (Kelly Macdonald) push for a divorce. Meanwhile, Dolly’s lovely younger sister Kitty (Alicia Vikander) is being courted by two men, Konstantin Levin (Domhall Gleeson), an awkward and earnest landowner, and Alexei Vronsky (Aaron Taylor-Johnson), a vain, handsome soldier. Kitty much prefers Vronsky, but once he catches a glimpse of Anna, he’s smitten, and Anna also finds in her heart a passion for Vronsky that she’s never felt with the boring Karenin.

The story proceeds from there, with lots of meaningful glances and many hurtful conversations between Anna and Karenin. He just doesn’t understand why she’s fallen in love with Vronsky, a strutting, self-impressed peacock bachelor soldier. Russian society is shocked by Anna’s scandalous public behavior even as they all become increasingly sympathetic to poor, confused Karenin. To avoid losing his adored Anna entirely, he reluctantly assents to her and Vronsky having an affair if it’s in secret. But, of course, it’s not.

The film is set in 19th-century Russia and the production is lavish, as are the sets and costumes. This version of Anna Karenina succeeds, however, because it has a delightfully dreamlike quality: the film is set both in Russian high society, and on a stage, a sort of Shakespearean “all the world’s a stage” setting. There’s no audience in the theater of Anna Karenina because that’s the role we, the cinematic audience, serve.

This narrative device gives rise to some extraordinary transitions, including one where a train traveling across the frozen steppes dissolves into a toy train going through a model of the icy terrain, and back to the train station where lovers Anna and Vronsky meet. Later, Anna visits her son, from whom she’s been exiled, and the camera pulls back and we see that, somehow, the boy’s bedroom is on stage and the foreground is framed by the limelights that illuminate the activity.

The performances are generally good, though Knightley again demonstrates her one-note acting ability. Law delivers a notable performance as the confused husband Karenin, and Gleeson embodies the humble Levin so well that I felt quite moved by his earnest courting of Kitty, even as he knows he’s no match for the dashing, sophisticated Vronsky.

I quite enjoyed writer Tom Stoppard’s reimagining of Anna Karenina as a dream-like parable of love, relationships and the challenge between following your heart versus doing what’s right or what’s expected of you, and director Joe Wright brings it to screen beautifully. Having said that, it’s still a costume drama with a rather Masterpiece Theater feel. If that’s appealing, this is well worth your time and is lavish on screen.