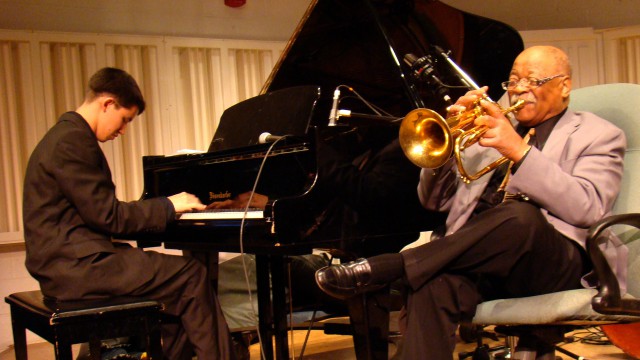 On Saturday, Nov. 22, the 37th Starz Denver Film Festival heads into its second and final weekend and rolls out the red carpet once again, this time for one of the best at this year’s fest: Keep On Keepin’ On.

Keep On Keepin’ On is a documentary following the stories of two men. The first is a teacher, a mentor and an inspiration: Clark Terry, one of the greatest jazz trumpeters of all time. The second is Terry’s student, Justin Kauflin, a 23-year-old blind piano player on the verge of his big break.

Born in St. Louis, Mo., “a trumpet player’s town,” on December 14, 1920, Terry fashioned his first trumpet from scraps found at the local junkyard. But from those humble beginnings he went on to play with Count Basie, Duke Ellington, Thelonious Monk and so on. To Quincy Jones, he was a teacher. To Miles Davis, he was an idol. To Dizzy Gillespie, he was “the happiest sound in jazz” and that sound was in high demand. Terry performed on more than 900 recordings with a who’s who of jazz greats, but that isn’t the legacy Terry is concerned with. For Terry, his greatest work is his students.

Alan Hicks, the director of the doc, was himself a student of Terry’s (Hicks is a drummer from Australia) and he claims responsibility for introducing Terry to Kauflin. Kauflin is a gifted pianist, but due to a rare degenerative disorder, Kauflin lost his sight at age 11. Although blessed on the ivories, Kauflin suffers from stage fright, which has held him back during crucial performances. Thankfully, he’s got Terry in his corner, and with Terry in your corner, everything is fine.

Keep On Keepin’ On is the first film from Hicks, and to make this labor of love, Hicks followed Terry and Kauflin around for five years. Compiling archive footage from Terry’s prolific career and adding animation to accompany Terry’s background adds to the film, but the most impressive footage comes from the intimate access Terry and Kauflin grant Hicks.

Hicks describes jazz as “improvisation within form,” and that is precisely what Hicks and his editor, Denver native Davis Coombe, come up with. Keep On Keepin’ On could have been a dull-as-dust story of two musicians, one on the way up and one on the way down, both meeting in the middle. Instead, Hicks and Coombe craft a documentary that tells the story of parallel lives, never mind the 70-year difference in their age.

Keep On Keepin’ On is a delight. It is a joyous, uplifting, tribute to one of the great American art forms, and it is filled to the brim with some of the best that music has to offer (Kauflin worked on the score with none other than jazz great and University of Colorado Boulder’s own, Dave Grusin). No one should miss it. After watching Keep On Keepin’ On, viewers will go to sleep knowing that somewhere in Arkansas, Terry and his students continue to run scales, late after midnight.

As usual, SDFF is pulling out all the stops, and Nov. 22’s screening of Keep On Keepin’ On will close with a performance from Kauflin himself. Tickets and information can be found at denverfilm.org.

This documentary shows the lives of seven unique New Yorkers whose eclectic unique style and vital spirit have guided their approach to aging. Based on Ari Seth Cohen’s famed blog of the same name, this film paints intimate and colorful portraits of independent, stylish women aged 62 to 95 who are challenging conventional ideas about beauty, aging and Western culture’s increasing obsession with youth, all the while being thrust into new found fame. — Boedecker Theater

During the chaotic final days of the Vietnam War, the North Vietnamese Army closes in on Saigon as the South Vietnamese resistance crumbles. A number of heroic Americans engage in unsanctioned and often makeshift operations in a desperate effort to save as many South Vietnamese lives as possible. At Boedecker. — Boedecker Theater

Tom Thomas, project manager for the Sand Creek Massacre National Historic Site, will discuss some of the difficulties of how to memorialize this brutal event, which happened 150 years ago on November 29. The talk will be followed by a screening of Little Big Man in which Dustin Hoffman plays a fictitious character, raised by Cheyenne, friend of Wild Bill Hickock and survivor of both Sand Creek Massacre and Little Big Horn. At Boedecker. — Boedecker Theater

After nearly four decades together, Ben (John Lithgow) and George (Alfred Molina) finally tie the knot in an idyllic wedding ceremony in lower Manhattan. But when George loses his job soon after, the couple must sell their apartment and temporarily live apart. At Boedecker. — Boedecker Theater

Veterans Speak presents this 1941 Gary Cooper film about a hillbilly sharpshooter who gets drafted into World War I. Despite claiming to be a pacifist, our protaganist becomes a war hero. Noon, Nov. 21 only. At Boedecker. — Boedecker Theater

THE TALE OF KAGUYA

Legendary Studio Ghibli cofounder Isao Takahata (Grave of the Fireflies, Pom Poko) revisits Japan’s most famous folktale in this gorgeous, handdrawn masterwork, decades in the making. Found inside a shining stalk of bamboo by an old bamboo cutter (James Caan) and his wife (Mary Steenburgen), a tiny girl grows rapidly into an exquisite young lady (Chloë Grace Moretz). The mysterious young princess enthralls all who encounter her — but ultimately she must confront her fate, the punishment for her crime. At Boedecker. — Boedecker Theater