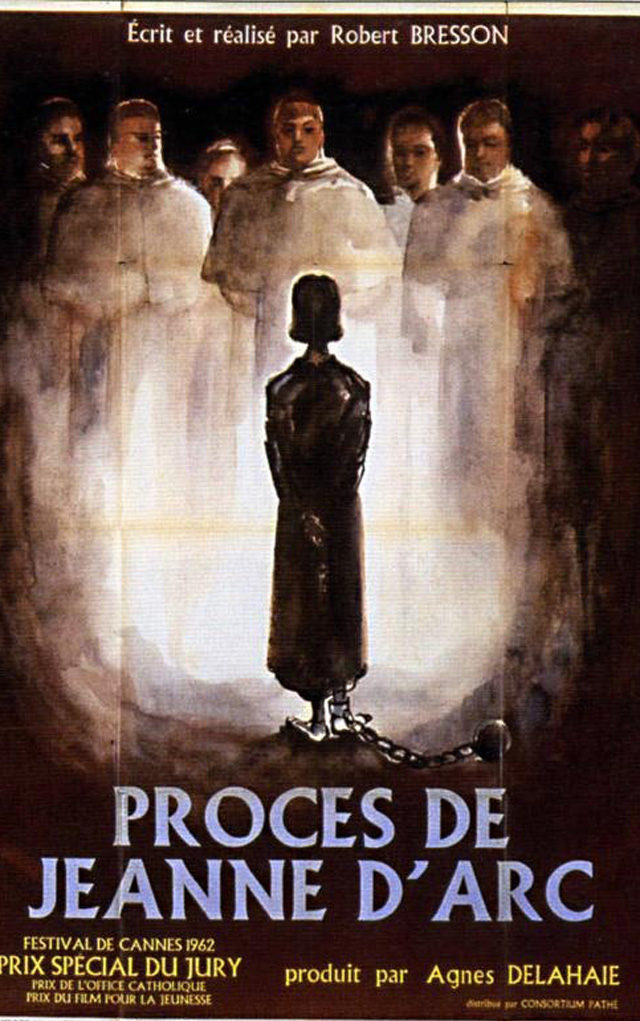 When the French writers for Cahiers du cinema coined the term “auteur” in the late ’50s, they envisioned an author of motion pictures — a director who exerted their will, their psychology, over every aspect of the films they made. These directors, almost all of them male, were ushered from the screening rooms and into cinema’s pantheon for future generations to come and study their ability with actors, their techniques with the camera and their control of the sound: John Ford, Howard Hawks, Alfred Hitchcock and so on. Students and wannabe filmmakers poured over every frame of the films these auteurs turned out looking for secrets and hints. Great as these men were, they were all products of a studio system, one they navigated with impressive panache. Another director who could be labeled a true auteur — one whose films are immediately recognizable with a single image, a single cut — is the much beloved, but often overlooked French filmmaker Robert Bresson.

Born in central France in 1907, Bresson took to films like a priest to the altar, with the same unrelenting devotion. He only made 13 films in the span of 40 years, but they are more than enough. All contain vast oceans to be explored and all resolutely and firmly express Bresson’s overriding theories and beliefs in cinematography — a word he used because he felt “cinema” simply wasn’t enough.

It is this cinematography that makes Bresson films essential. With the International Film Series (IFS) screening three of his overlooked gems, here is a chance to familiarize yourself with the cinematography of Bresson.

In each of these movies, Bresson presents his stories without adornment, without excess and without window dressings. He wanted his films to be felt first, understood second. In a 1963 interview with Georges Sadoul, Bresson perfectly summed up his approach by casually proclaiming something along the lines of: You have to strip the wires if you want the current to flow.

And strip the wires he did for his 1962 film The Trial of Joan of Arc. Running a swift 65 minutes, Bresson not only pares the story down to the bare bones of the trial, he also refused to manufacture a period piece that looked like his cameras were magically transported back to 1431. Instead, Bresson’s Joan is a modern woman fighting for her beliefs from under the thumb of a crushing patriarchy.

The Trial of Joan of Arc was not well received when it was released, but time has been kind to the film, as it has been to Bresson’s 1943 debut, Angels of Sin. Made following a yearlong stint in a prisoner-of-war camp and working from a script penned by a French Resistance Dominican priest and the famed dramatist Jean Giraudoux, Angels of Sin is set in a nunnery that rehabilitates female prisoners. Though the style Bresson uses — particularly his use of dissolves to abbreviate time — seems familiar today, it was experimental in 1943 and would help lay the groundwork for the French New Wave that would follow 15 years later.

Bresson’s sophomore effort, Ladies of the Park, would mark the first and final time he would work with the equally magnificent filmmaker Jean Cocteau, with Cocteau adapting an episode from Diderot’s Jacques the Fatalist. This story of a man tricked into marrying a prostitute was also not well received when released in 1945, but when the movie played at a retrospective 10 years later, the audience flocked to see it. Cocteau was quoted saying the film “won its case in the appeals courts.”

Unlike the films of another Catholic director, Alfred Hitchcock, the films of Bresson lack glitz, glam, grade-A celebrities and substantial budgets. They don’t need them. They are undeniably profound and giving, and they are best viewed in close succession with one another, which makes IFS’ three screenings all the more exciting.

Bresson is pure intoxication, and for those familiar with his more well-known works (Pickpocket, A Man Escaped and The Diary of a Country Priest), these three films will be like manna from above. For the uninitiated, here is a chance to fall in love with Bresson’s white-hot passion. And, as an added bonus, all three films will be projected from 35mm prints with Angels and Ladies introduced by University of Colorado Boulder film professor David Gatten.