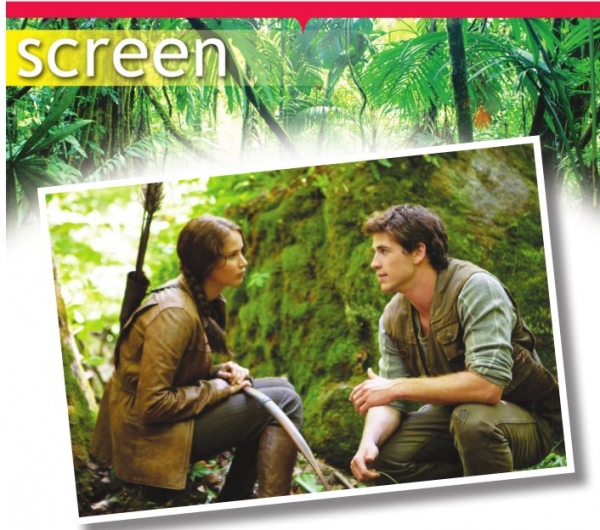 In a future where the government keeps a tight rein on the populace, the annual reminder of an earlier failed uprising is The Hunger Games, a televised battle to the death of teens chosen from each of 12 districts. When her young sister Prim (Willow Shields) is selected as the female tribute from District 12, tough rebel Katniss Everdeen (Jennifer Lawrence) volunteers in her place, getting paired up with local baker’s son Peeta Mellark (Josh Hutcherson).

They’re sent to the capital in preparation for the event, and after much pageantry and minimal training, the heart of this intense, if somewhat confusing, teen romance thriller begins:

The Hunger Games themselves.

Being a teen romance, however, there’s a third person in the triangle, Gale (Liam Hemsworth), who has been a childhood friend to Katniss and is only just realizing that he loves her. He’s stuck in District 12 and has to watch her blossoming relationship with Peeta during televised game coverage. Is her romance with Peeta genuine, or just a ploy to gain fans and sponsors during the games?

The book has a retinue of colorful supporting characters who help Katniss during the games, each of whom is also wrestling with their hatred of the game and the totalitarian regime. Unfortunately, little of that translates to the screen, and characters like President Snow (a completely wasted Donald Sutherland) and head stylist Cinna (Lenny Kravitz) come across as one-dimensional at best.

Once the games start, the film becomes a high-tech Lord of the Flies, and within moments of the competition starting, half the 24 children are killed by the others: The only way to win is to be the last person alive, so most of the tributes take that to heart in a bloodthirsty manner.

Even with the violent deaths (including one neck broken, one wild animal mauling and many knives and swords) there was surprisingly little blood and not a single obscenity, even when most appropriate. The PG-13 rating is justified because it’s quite tense in scenes, but it is indeed appropriate for older teens or those used to action or adventure films.

Thrilling in parts, The Hunger Games is a faithful adaptation of the best-selling novel of the same name, and that’s both its greatest strength and weakness: If you’ve read the book, you’ll understand the story and motivation of the different characters and quite enjoy how brilliantly even complicated scenes from the book are realized on screen. If you haven’t read the book, expect to be confused by the story and what motivates the different characters in the film. Being a teen romance, it’s also sappy and clichÃƒÂ© at points, but when the film ends with an obvious sequel in mind, you’ll find yourself looking forward to Catching Fire, the second book in the series, sure to be filmed after the inevitable success of The Hunger Games.