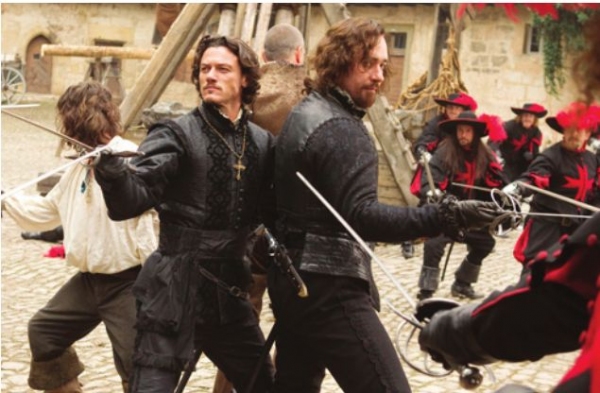 The Alexandre Dumas book The Three Musketeers still offers a thrilling adventure with the coming-of-age tale of D’Artagnan leaving home to join up with the fabled Musketeers, acting in the service of King Louis XIII against the evil Cardinal Richelieu. Sword fights, treachery, beautiful women, honor: It’s a truly epic tale.

With a story this familiar, the writers have to come up with a new take that weaves in the three Musketeers — Athos, Porthos and Aramis — and the familiar characters of Richelieu, Milady de Winter, the Duke of Buckingham and Rochefort with something new, something that’ll capture our modern sensibilities.

In this version, it’s an airship that the Duke of Buckingham (Orlando Bloom) uses to visit King Louis XIII (Freddie Fox). The King must have an airship of his own, but evil Cardinal Richelieu (Christoph Waltz) instead secretly builds one for his own nefarious purposes, having stolen the plans from the Duke by way of the feminine wiles of the equally evil Milady de Winter (Milla Jovovich).

While the cast is strong and the individual players have turned in solid performances in films like Lord of the Rings, Inglourious Basterds, Death at a Funeral and Robin Hood, none displayed more than minimal effort in this outing. It hurts the film, ranging from Fox’s painful performance as King Louis XIII to Jovovich’s disengaged attempt at one of the great femme fatales of the big screen, Milady de Winter.

There are a ridiculous number of plot holes and anachronisms, including one scene where Rochefort (Mads Mikkelsen) toys with a modern butterfly knife. Did the prop-maker just not pay attention to the setting? Then there’s the scene where D’Artagnan (Logan Lerman) finds that his horse has received a citation from Aramis (Luke Evans) for despoiling the city street. Unsure what it means, Aramis explains to him, “It’s a ticket.” Um, yeah.

More than that, though, there’s the whole storyline of warships of the air, invented by Leonardo da Vinci, with the plans long-hidden in a secret crypt more suited to Indiana Jones. Those plans are stolen by the Duke of Buckingham, and he figures out how to build one. They’re hot air balloons with the incredibly heavy weight of a full wooden ship — complete with cannons! — harnessed below.

Besides all the reasons that this wouldn’t actually fly, it also produces an extended aerial battle scene between the Musketeers — D’Artagnan, Aramis, Athos (Matthew Macfadyen) and Porthos (Ray Stevenson) — and Milady all on the Duke’s ship (which they’ve stolen without a peep from the British), and Rochefort and his minions on the larger French airship that’s a rip-off from the far more entertaining Pirates of the Caribbean.

That’s ultimately the great failing of this version of The Three Musketeers. The production team has managed to take a wonderful story and turn it into a demo reel for a special effects house, replete with anachronistic scenes, a wobbly narrative and action scenes that are completely unbelievable, even as they show off the latest CG capabilities. A completely forgettable version. Just skip it.