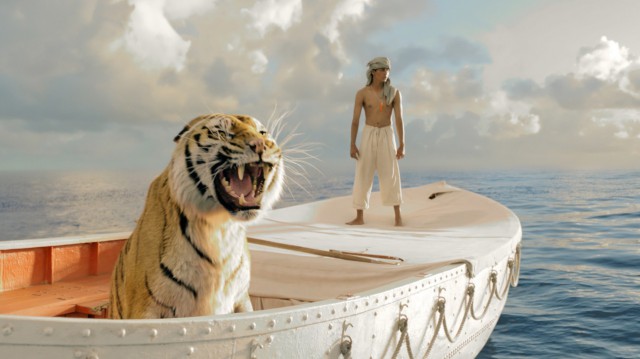 Being stranded in the middle of an unforgiving ocean is a theme that’s been explored in films as diverse as Swiss Family Robinson and Hitchcock’s surprisingly tense Lifeboat. But being cast adrift for more than 200 days in a lifeboat with an adult Bengal tiger? It makes an empty lifeboat seem like a positive luxury, but that’s the journey that young Piscine Militor Patel — “Pi” for short — embarks on after the freighter he’s on sinks in the middle of the Pacific Ocean.

Based on a best-selling book by Yann Martel, Life of Pi comes to the screen beautifully, thanks to the vision of director Ang Lee. Whether it’s a floating mangrove island overrun with meerkats, a magical sea of bioluminescent jellyfish, or just the frightening snarl of Richard Parker, the tiger, everything works well. The performances, and particularly that of Suraj Sharma, who plays the stranded Pi, are superb.

There is a niggling problem with the film, though, one that is a common complaint with big-budget cinema: 3-D. Lee was passionate about the 3-D process and cites groundbreaking movies like Avatar as an inspiration, but there are too many cheap 3-D effects in Life of Pi. Sticks that wave at the camera, the tiger leaping at the viewer, they’re not just trite clichés that beg the viewer to admire the effect but effects that also break the narrative spell, bringing us out of the story.

The narrative structure of Life of Pi is complicated, a tale of his life as told by the adult Pi (Irrfan Khan) to a spiritually adrift writer (Rafe Spall) who has been told that Pi’s story “will make you believe in God.” We then meet Pi as a young child (played by Ayush Tandon) experiencing difficulties in school due to his curious name: “Pissy,” as the other children tease. He renames himself Pi, the irrational constant of a circle’s circumference to its diameter, and becomes a local hero. His childhood is characterized by his search for God, simultaneously encompassing Hindu, Christian and Muslim beliefs. His family owns a zoo, and when, years later, they fall on hard times as India goes through major political upheaval, Pi’s father (Adil Hussain) decides the best path is for them to emigrate to Canada, along with all their animals.

The last chapter of the book took Life of Pi from an interesting read to a profound exploration of the nature of reality, a provocative recast of the entire narrative, and this sense of wonder is retained in the cinematic retelling. It explores how we are destined to retell the story of our life in a manner that makes us a heroic figure rather than just a figure upon the stage of life.

Life of Pi is a wonder to behold, a reminder of the power of cinema, of the wondrous journeys that a superb filmmaker, cast and production crew can take us on as we sit in a dark theater, seeking escape. It’s a shoo-in for a Best Picture nomination for the Academy Awards and it’s well worth seeing, even with the occasionally overwrought 3-D. I’m eager to watch it again.