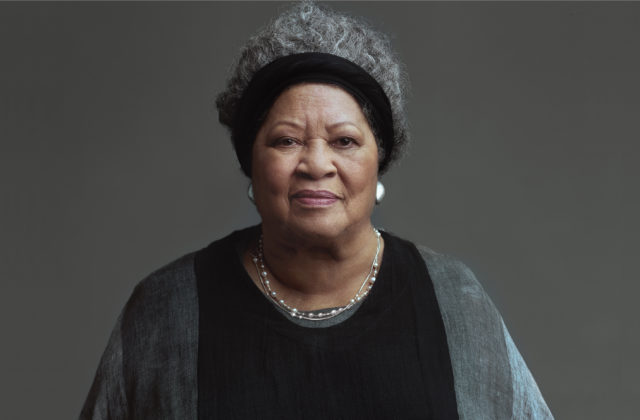 With the wisdom of the wise and the smile of a sage, Toni Morrison sits before the camera. No background behind her, nothing in front to distract, just Morrison talking directly to the camera as if we are opposite her. We are, and we listen with rapt attention for two hours. We could listen longer, but Morrison is busy and time is short.

Toni Morrison: The Pieces I Am is enough. Thanks to Morrison’s skill as a storyteller and director Timothy Greenfield-Sanders’ approach, The Pieces I Am is both stimulating and engaging. The movie feels more like a conversation than a lecture. The first conversation is between Morrison and the audience. The second is a chorus of voices all filmed using standard interview procedures: asymmetrically framed and speaking to someone just to the right or left of the lens.

They are friends, scholars, historians and contemporaries: Oprah Winfrey, Hilton Als, Walter Mosley, Sonia Sanchez, Robert Gottlieb, David Carrasco and a slew of others. They are here to fill in the gaps, provide context and perspective. Sitting mythically between their voices is Morrison, who tells her tale with grace and ease.

It’s a keen approach for a writer who Carrasco calls, “the Emancipation Proclamation of the English language.” It’s a good line, but heaping praise on a writer often distances them, and the reality of their struggle, from the reader. Granted, a great number of readers know Morrison thanks to Oprah’s massively successful book club, but the real life behind the work sometimes slips through the cracks. That’s what makes The Pieces I Am such a caring work; it devotes the time to Morrison’s career as a creative writing teacher at Texas Southern University and Howard University, her time as an editor at Random House — where she championed black and female authors — and her time as a single mother raising two sons.

Furthermore, Morrison’s education and career traversed the 1950s and ’60s — a time when Morrison was systemically denied the simple decencies her white colleagues enjoyed. When Morrison penned her debut novel in 1970, The Bluest Eye, she provided her character Pecola a simple wish: To have blue eyes.

The book jacket description found on 1987’s Beloved, for which Morrison won the Pulitzer and Nobel Peace prizes, reads: “Sethe. Proud and beautiful, she escaped from slavery but is haunted by its heritage.” The same could be said of Morrison. Only it was not slavery Morrison ran from; it was the systemic racism and oppression fostered in the shadow of the 13th Amendment.

Not an easy subject to navigate, but The Pieces I Am does so with elegance, and without sidestepping the unsavory parts of life. Nothing came easy to Morrison, but she has managed much out of little. Her secret is the same secret that makes her carrot cake the best carrot cake in the world: “No one uses enough carrots!” Morrison exclaims.

The same is true of Morrison’s writing and her life: She fills it with everything. Even carrots.