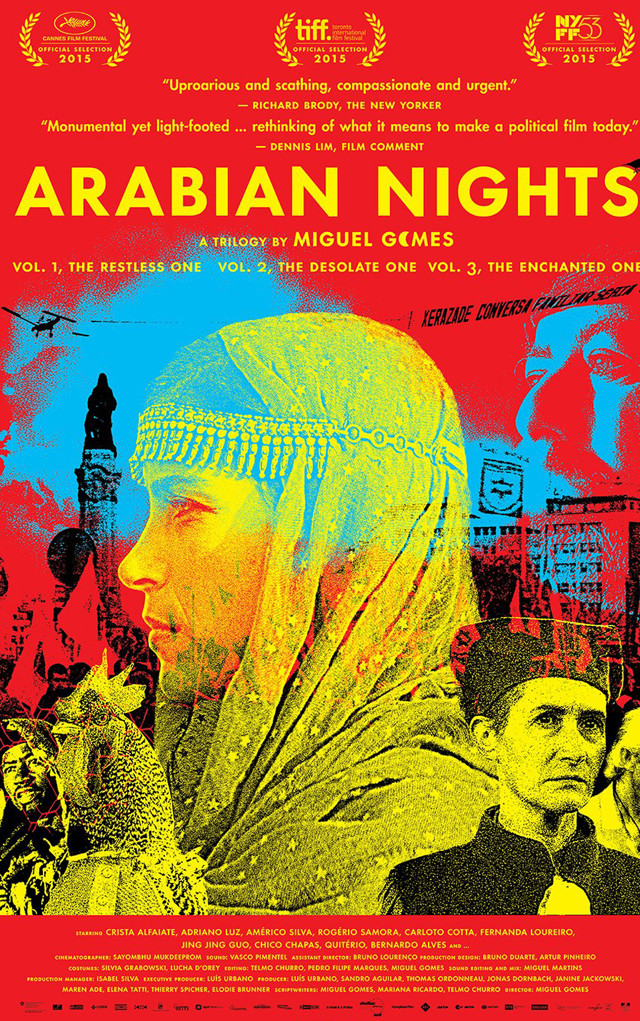 Ambition comes in all shapes and sizes, but when it comes to the movies, ambition tends to come big. So big that one night is not enough. That is why CU’s International Film Series is devoting an entire weekend to Miguel Gomes’ Portuguese opus, Arabian Nights, a six-and-a-half hour triptych that is unlike anything you’ve ever seen.

Drawing on the structure from One Thousand and One Nights — where a reluctant bride, Scheherazade, enchants her murderous husband, the Sasanian King, with tales to stay her execution — Gomes provides commentary on current cultural and political crises in Portugal. Dealing with the financial collapse head on, Gomes weaves magical realism and absurdity throughout this impressive construct of political consciousness and achieves a result that is both of a time and timeless. Here, the mythical past invades a conflicted present as a magical Shaman swindles billions from politicians, a genie appears at a court hearing and a Grand Vizier and his daughter ride a Ferris wheel, discussing the nature of narrative.

“The stories, characters and places that Scheherazade will tell us about acquired a fictional form from facts that occurred in Portugal between August 2013 and July 2014,” a title card introducing each installment tells us. “During this period the country was held hostage to a program of economic austerity executed by a government apparently devoid of social justice.”

That stage is set with the first of many absurd tales: The Men With Hard-Ons. In it, a group of politicians travel to a seaside villa to discuss business. Along the way, they cross paths with an African Shaman with a magical spray that offers the men a fantastic and enormous erection. How could they say no? But alas, the erections don’t subside and no matter of time, or sexual satisfaction, will make them subside. The Shaman offers an antidote, but it will cost. The politicians agree, but the money comes not from their pockets, but from the pockets of the people. Once again, a nation pays dearly for bourgeois boners.

But Gomes isn’t content to simply rely on absurdism, and imbues his trilogy with journalistic quotidian. Prior to shooting, Gomes sent out a team of reporters to capture the stories of everyday Portuguese; what they brought back is the meat and potatoes of Arabian Nights. Gomes then marries that reality with flights of fancy to undercut the dismal situation. He does not do this flippantly, but with great urgency and importance. This is Portugal, Gomes offers his audience. This is our country, our culture.

Though spilt into three parts, Arabian Nights is best viewed in close succession, making IFS’s weekend-long presentation all the more enjoyable. Six-plus hours is a lot of material to work through, and though the movie may seem bloated at first, it quickly becomes an enchantment itself. Audience eyes are glued to the screen to see what wonders Gomes will concoct next. Be it an exploding whale, a fantastical trail, or an apartment block full of eclectic characters seen through the eyes of Dixie, a dog that is, “a love machine as much as it is a forgetting machine.”

The same could be said of a nation.