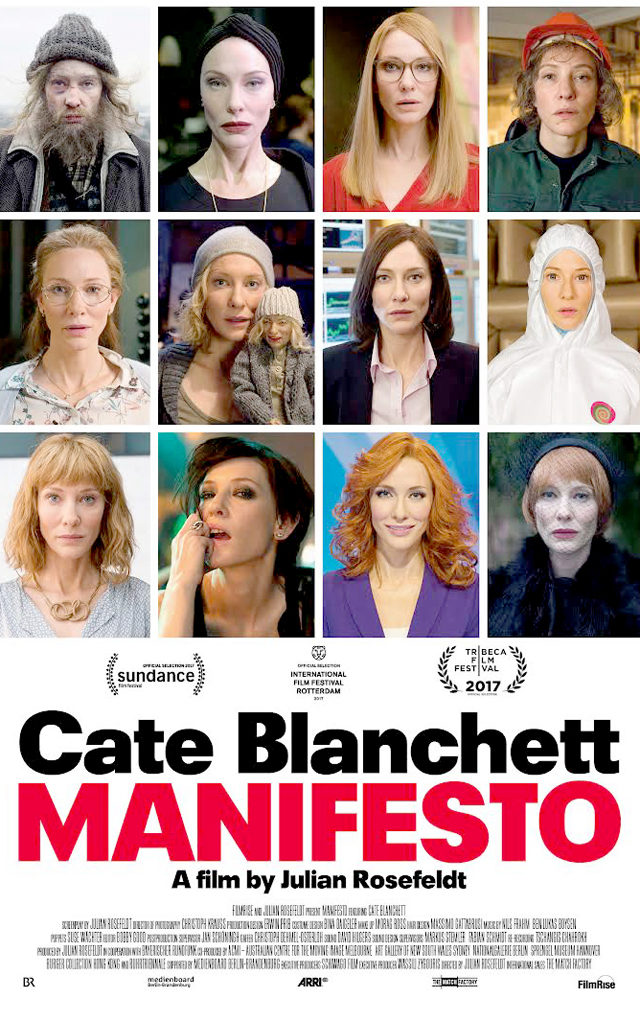 manifesto, noun: a written statement declaring publicly the intentions, motives, or views of its issuer

What we need is works of art that are strong, straight, precise and forever beyond understanding,” intones the magnificent Cate Blanchett from behind a funeral veil. Cloaked in black, she stands before the coffin, the attendees and the movie cameras. This isn’t your standard eulogy, but then again, you’re not watching a standard movie. This is a manifesto, and in that coffin lays not the dearly departed but cinema itself. Or literature. Or maybe just art in general.

What is being buried is hard to pin down because it’s hard to tell just what German artist Julian Rosefeldt is going for with his first feature. Collecting quotes, ideas and theories from 29 thinkers ranging from Karl Marx to Stan Brakhage and tackling no less than 29 different art movements — from architecture to pop art, Dadaism to Spatialism — Manifesto is just that, a manifesto; nothing more, nothing less. There is no overarching story, no narrative to hang set pieces on, no beginning, middle or end. Just ideas. Lots of ideas. And Cate Blanchett.

This assembly of aphorisms, observations, mantras and quotes that Rosefeldt collects and compresses are presented in one long monologue that Blanchett performs as 13 different characters. Each segment discusses the nature of art, the nature of the movement and its potential shortcomings. But there are no title cards to clue you into what movement is being discussed, and Blanchett doesn’t pause to attribute any of the quotes. You simply go along with it and pick out what you can.

The overall thrust of Blanchett’s monologue is the exploration of the manifesto, and if such a thing is even possible. Maybe it isn’t. Maybe we’re all just tilting at windmills, trying to hold back oblivion.

Sometimes irritating, sometimes profound, Manifesto will most likely work best for viewers who do not yet have one. That’s not to say viewers with their own ideas about art cannot find a nugget or two of truth in the film, but with this many disparate theories tossed around, there will be more to disagree with than agree.

But what manna this movie will be for the teenager and the young adult who have become fascinated by deep concepts and broad ideas. Surely they will find something of value here.

For this reviewer, that value is Blanchett’s performance. Sometimes she uses makeup to transform herself, other times she lets her magnificent voice do the heavy lifting. But in all 12 segments, Manifesto surrenders to her talents, marvels at her technique and basks in her glow. When the movie is at its best, Blanchett pokes fun at herself, and the very notion of acting, while simultaneously giving a serious and devout performance.

Rosefeldt complements Blanchett’s work with images that are both stolen from other filmmakers and invented wholly. Or maybe it’s all stolen and rearranged just enough to make it look new again. The more you think about it, the more Manifesto sounds like a snake eating its own tail for 90-plus minutes. That’s certainly something worth seeing.