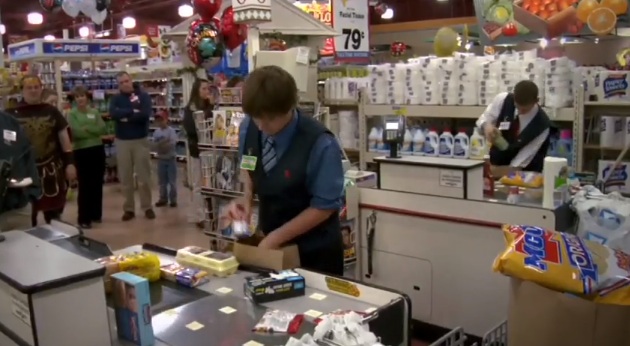 A really good documentary isn’t about whatever it looks like it’s about. It’s about people.
I don’t mean nature docs, which are actually about nature. I mean films like Ready, Set, Bag!, an independent documentary that follows eight competitors in the National Grocers’ Association 2006 Best Bagger Competition.

So it’s a documentary about grocery store baggers trying really hard to bag groceries quickly. Except it’s way more than that. Ready, Set, Bag!, directed by Alex D. da Silva and Justine Jacob and produced by Oren Jacob, is a film about dedication, about focus and desire, about family and frustration and hope and the American working class.

That sounds overstated for an 80-minute movie in which various people bag groceries. But Ready, Set, Bag! goes way beyond that: It captures its subjects with compassion and empathy and becomes a truly moving drama. Made in 2008, the documentary has screened at festivals for years and will be showing beginning Sept. 13 at the Boedecker Theater.

The film’s style — raw, near-awkward interviews with the eight contestants and their loved ones, spliced with scenes of bagging practice and other elements of their lives — generates an immediate, almost primal connection with the subjects. It’s what reality TV dreams it is: Within 10 minutes you’ve not only met the competitors, you feel for them and want the best for them.

It doesn’t hurt that they’re instantly likable. Roger Chen, the state champion from Alabama, is in it for the money — so he can continue his education. At the national competition in Las Vegas, when “The Star-Spangled Banner” plays on Fremont Street, Roger stops and listens. At the end, he claps.

And Brian Bay from Utah was so nervous in front of the camera that he couldn’t speak.

“If you can tell from the state competition when I had a quick interview, I was terrified of the camera at first and let my wife do most of the talking,” he says in an email.

Most of the competitors have been going to district and state competitions for years. Bay has come closest to the title — in 2005 he lost at nationals because he overlooked a roll of LifeSavers and left them out of his bags.

That trip taught him a lot, though, he says.

“I was proud to be there, but discouraged after all of my hard work and not qualifying for the top five to compete again,” he says. “After returning back home I decided I would try again and train harder to be prepared for the level of expertise that is there each year.”

Like his competition, Bay is intense. But he’s far from heartless: onstage at nationals he pauses to shake hands with his opponents. And he says Ready, Set, Bag! itself helped him see the other competitors differently.

“After seeing the documentary and finding out more about the story behind my competitors, it did make me think twice about the competition,” he says. “I am proud of what each of us accomplished, and I think we all recognized that we are the best in the nation, no matter who won first place. Just getting there was a great experience.”