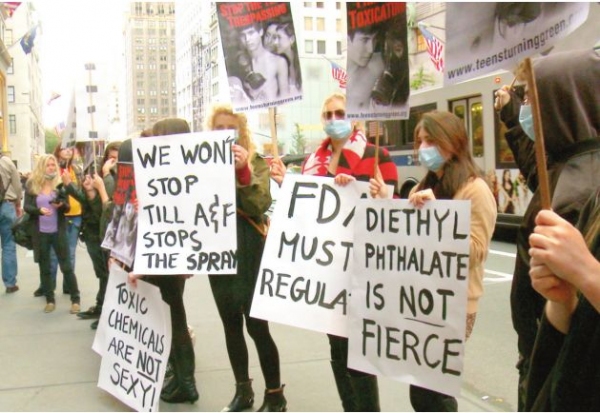 Every single one of us is being transformed daily into a walking cocktail of chemicals.

With more than 80,000 different chemicals currently in use in the United States, even newborn babies who has never eaten food or taken a breath can come out of the womb with more than 20 chemicals already in their blood. The Human Experiment examines how our constant exposure to things like plastics and flame-retardants in furniture may be impacting our health. This is an informative and terrifying film.

Sean Penn is both the executive producer and narrator of this documentary that tells the story of our ever-increasing exposure to chemicals through the lives of several people dealing with a variety of health issues ranging from breast cancer to infertility to autism.

It’s a massive problem. There are currently 42 billion pounds of chemicals — enough to fill 623,000 tanker trucks — entering American commerce every single day. This raises the question: How is our exposure to so much and so many toxic chemicals impacting our health? Unfortunately, no one can answer that question with certainty, hence the title of the film, The Human Experiment. But a lot of things appear to be resulting from this exposure.

In 1999, 1 in 500 kids had autism. Today, it’s one in 88. According to the film, during the past 45 years, childhood brain cancer has increased 38 percent; asthma 80 percent; leukemia in children 74 percent; early onset puberty 55 percent; ADHD 53 percent; genital deformities in baby boys 122 percent; life-threatening birth defects more than 100 percent.

The filmmakers spoke with a variety of experts who believe that our exposure to chemicals is at the heart of these rapidly increasing health threats to our children. They also examined why it is so hard to protect ourselves and our loved ones from this unwanted chemical assault. The short answer is money.

The chemical industry spent $52 million on its lobbying efforts in 2011. For every lobbyist trying to convince Congress to reform our outdated and dangerous toxic laws — laws written in the 1970s that declare that every chemical is safe for market until proven otherwise — there are six lobbyists for the chemical industry filling campaign coffers in order to keep things just as they are.

The Human Experiment is a must see at this year’s film festival. But beware, it might just turn you into an activist.