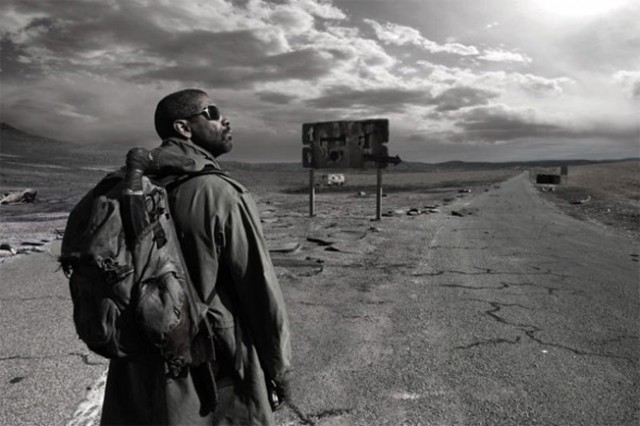 The 23rd Psalm, “Yea, though I walk through the valley of the shadow of death,” is the inspiration for the dark, moody film The Book of Eli, and though it takes quite a while to move beyond its Mad Max roots, it is ultimately a modern religious parable.

Denzel Washington is the main character, Eli, and he’s spent 30 years slowly walking through a vast post-apocalyptic wasteland, carrying his precious Book of Eli, a mysterious leather-clad tome that he dutifully reads every day. He walks into a cliché post-apocalyptic bar run by scroungy tough guy Carnegie (Gary Oldman), who has spent years questing for The Book. And the battle of good and evil that is at the heart of the film begins.

The premise is interesting, and as a parable The Book of Eli is reasonably satisfying, but it’s also deeply flawed with poor pacing, unceasingly gloomy cinematography and surprisingly poor acting.

The film starts out intimating that a massive nuclear explosion has just taken place and is slowly panning through a gloomy grey forest covered in the ash that slowly falls from the heavens. Suddenly one of the bodies moves, shoots an animal and bags it: Eli has captured his dinner. In this first scene he’s wearing a gas mask, which shortly changes to a black-andwhite Keffiyeh covering his lower face, to just wearing dark shades.

As Eli travels his slow journey, he encounters the typical low-life types you’d expect in a Mad Maxesque film, including a gang of hijackers who try to jump him but find he’s more than a match, with his machete-like sword neatly parrying even a chainsawwielding thug. As with subsequent fight scenes, this is well-choreographed, exciting and fast: it’s not many seconds before they’re dead and he’s putting his blade away, without even breaking a sweat.

In the worst story twist in the movie, while a captor of Carnegie’s, Eli has lovely Solara (Mila Kunis) visit to offer him, well, she’s an attractive young woman and it’s a rough post-apocalyptic setting, you can guess the rest. He refuses, but she stays with him anyway, and before they eat the food he’s been given, he says grace. She’s never heard such a thing and is fascinated, so much so that the next morning, when she’s having breakfast with her mother, Carnegie’s girlfriend Claudia ( Jennifer Beals), she takes her mother’s hands and says grace over their food too. WTF?

While the cinematography was grey and depressing, the film itself was well constructed. The music was properly — and endlessly — tense and gloomy, and everything looked and felt, well, like we imagine it would decades after The Big One in a society that hasn’t been able to advance beyond the most crude.

The acting was really one of the weakest points in the film. From Kunis to Beals, Washington to Oldman, there wasn’t a single actor in this film who seemed to be fully engaged in the storyline. It hurt the movie almost as much as the poor story.

I liked certain elements of The Book of Eli, and I’m generally quite a fan of the actors, notably Gary Oldman and Mila Kunis, but none of them gave a strong performance in this throwaway post-apocalyptic religious parable.