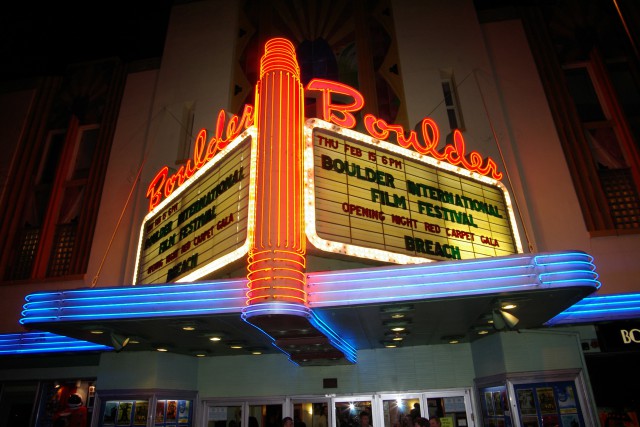 Front Range film lovers, this is your season.

Named one of the “25 Coolest Film Festivals” this past summer by Movie Maker Magazine, the Boulder International Film Festival returns for its sixth annual four-day extravaganza, with 40-plus films from 18 countries, along with 31 filmmakers, panel discussions, numerous accomplished actors and one multi-award winning superstar who will be honored for a diverse body of work spanning several decades. This year BIFF also hosts a ground-breaking digital media symposium, part of the state’s initiative to help propel Colorado to the forefront of 21st-century entertainment.

Each spring, sisters Robin and Kathy Beeck, award-winning filmmakers in their own right, put out the call for entries, and they also travel from festival to festival picking from the best of the best. Some 600 entries were sent to their Boulder offices, with an additional 300 to 400 films considered from other festivals.

“We’ve got a lot of films that are coming right to BIFF from Sundance,” says Robin. “Our lineup is just stellar. It’s always been very good, but we’re really, really proud of what we’re bringing in this year.”

But what criteria are required for a flick to get their seal of approval?

“Great stories,” Robin quickly answers. “I mean these are all films that are going to leave (you) with something you’re going to think about later.

“And really well put together,” Kathy adds. “These are all films that have been winning awards in other places, other film festivals, so we got a really great mix of films that have been doing well. And a lot are films that most people may not see because they’re not coming to the cineplex. This might be the only place where people get to see them. We don’t program it if it’s not fantastic.”

This year Kathy and Robin say more narrative-lead films will be shown as opposed to the documentary-heavy festivals of the past. But what are the best of this year’s crop?

“So, how many films do you want to hear about?” Robin laughs. “Do you know the fabulous Tilda Swinton? We’re really excited to get the Colorado premiere of her film I Am Love, which is a pre-release screening. It’s about forbidden passion in a cultivated Italian family. It’s so beautifully shot.”

One of the great Sundance films they acquired is Enemies of the People, about the Killing Fields in Cambodia. Robin explains the filmmaker’s parents were killed back then, “and he decided to make a film about what happened, so he got to know some of the people who killed others in the Killing Fields. Then he got to know Brother Number Two, who was Pol Pot’s right hand man. I don’t want to tell you what happens, but it’s just an incredible film.”

Kathy and Robin are also excited for Icons Among Us, a documentary film that chronicles a slew of different jazz players throughout the years along with giving a substantial jazz history lesson. The festival will also have its fair share of foreign films.

“We’ve got Ajami, which is the first Arabic language film Israel has ever entered in the Academy Awards,” says Robin, “It’s a fiction film, a narrative, with five different stories about the tensions between the Arabs and the Israelis.

“It’s really intense, and we always like having films from that part of the world,” Kathy adds.

But not all the films at this year’s fest are serious
introspective projects. According to Robin and Kathy, the humor ranges
from bittersweet memoirs to politically incorrect mock-docs. One film, The Misfortunates, out
of Belgium, tells the coming of age story of a writer who grew up
living with three alcoholic uncles, an alcoholic father and the
dysfunction within the family. Robin says that although the film has a
serious theme, it is a funny and touching story.

“Cooper’s Camera is
a Canadian film that we saw at Toronto,” Kathy says. “It’s just
hysterical. It’s another kind of dysfunctional family film, but almost
like a mockumentary. It’s about a family in the 1980s that got a video
camera for Christmas, and now they’ve just found the footage from back
then.

“We just love it,” Robin adds. “We couldn’t stop laughing.”

Both
warn that this is not a film for everyone’s taste, there’s even a
warning in the program synopsis describing it as “absolutely
offensive.” Cooper’s Camera features a couple of performers from the Daily Show, Samantha Bee and Jason Jones.

“Two main characters from the film, Mike Beaver and Jennifer Baxter, will be at the screening here in Boulder,” Robin says.

“We’re
also thrilled about opening night, with Blythe Danner,” Robin says
about the Opening Night Red Carpet Gala on Thursday at 6:30 p.m. “She’s
so lovely. We have her film, called The Lightkeepers (also starring Richard Dreyfuss), which was the closing night film at the Palm Spring International Film Festival.”

Following
the screening, Ms. Danner, who has appeared in dozens of films since
the 1970s, will be on hand for a Q&A, along with the film’s
director and producer.

“We expect it to the most memorable opening night we’ve ever had,” Kathy says.

The
Closing Night Awards Ceremony, taking place Sunday at 7 p.m., should
also be quite memorable. Actor Alec Baldwin will be on hand to receive
BIFF’s Award for Acting Excellence.

“He’s
a very fascinating person, and there’s a lot of depth there,” Robin
says. “He’s such a versatile actor. He can play the villain. He can
play the handsome leading man. He’s great in supporting roles. Also
he’s done television. He’s done film. He’s done a lot of theater.”

He’s also won numerous awards including a couple of Emmy’s (for 30 Rock), Golden
Globes, SAG awards, and many others. An hour-long Q&A at the
Boulder Theater closing this year’s BIFF will follow a short feature
with clips of his work.

“How many people can be
so versatile and do it all so well, and also be so popular?” Robin
says. “We couldn’t think of anybody better to bring this year, and
we’re just thrilled about it.”

DiMe digs in Disney producer, Don Hahn (Lion King, Beauty and the Beast), will
head a panel of experts at the first Digital Media Convergence
Symposium (DiMe) during this year’s Boulder International Film
Festival. While Hahn will also be presenting Waking Sleeping Beauty, his
blunt, behind the scenes, tell-all about Disney Studios’ renaissance
following a low point in the mid 1980s, the DiMe brings together
leaders from animation, HD filmmaking, media convergence, game
development, music and business. The panel discussion will be followed
by a networking session with a sharing of various artistic endeavors.

Presented
in conjunction with the Colorado Office of Film, Television & Media
(COFTM) and the Boulder Convention and Visitors Bureau, the DiMe
kick-offs the creative industry agenda launched by the Governor’s
office last year.

“Colorado
has a long tradition of creative resources, and in the last decade has
also become a fertile landscape for new technology companies,” says Don
Marostica, head of Colorado’s Office of Economic Development and
International Trade. “DiMe will present the depth and breadth of these
existing and emerging industries with an eye on keeping these coveted
jobs within the Centennial state.”

Tickets are $35 and available at BIFF1.com.

The Boulder International Film Festival runs from Feb. 11 to Feb. 14 at the Boulder Theater, The Church, Boulder Public Library, and St. Julien Hotel.