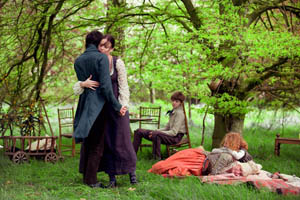 Certain images in Jane Campion’s Bright Star are beautiful, as opposed to merely attractive, and only a major talent could’ve produced them. My favorite is a sundrenched shot of Abbie Cornish’s Fanny Brawne, her head and heart newly opened to the intoxication of love and poetry, lying on her bed, with a perfectly timed breeze fluttering her curtains just so. Cornish enters this early 19th century dream world of Brawne’s relationship with the poet John Keats (played by Ben Whishaw) like an explorer seeking something she doesn’t believe exists, which makes her fulfillment however short-lived all the sweeter. Writer-director Campion has stripped everything down in Bright Star to focus on this feeling, and a few brief years of Fanny’s story.

And after two viewings, I’m still wondering why I struggled to engage with it.

There is very little wrong with Campion’s picture, her first feature since In the Cut six years ago. It revels in both romantic love and the allure of the Romantic poets. It is scrupulously well-crafted. Campion’s script, inspired by the exceptional Andrew Motion biography Keats, puts one narrative foot in front of the other, studiously. Our perspective is always allied with Brawne’s. The quickwitted, sharp-eyed teenager with an eye for fashion met Keats when he was 23; Keats and his fellow scribe,

None of Fanny’s letters to Keats have survived, which meant Campion had to imagine a heroine to suit her dramatic interests. As Bright Star proceeds, we see the two young friends become more than friends. (Sexual? Chaste? Campion implies the latter.) Keats’ limited financial means prevented a union, but he and Fanny became unofficially engaged anyway. Death was never far from life for these two; Keats’ brother died very young, and Fanny surely knew Keats himself wasn’t long for this earth. In the film they circle each other and draw each other in, and out. The “other woman” in this claustrophobic triangle was a man: Keats’ platonic friend and writing partner, Brown, resented Fanny and her claims on Keats’ time.

It’s rich stuff, and Campion has deliberately calmed her technique down for the ravishingly photographed, languidly paced proceedings. I vastly prefer Campion’s earlier works, including The Piano (which had real cinematic life in it) and especially The Portrait of a Lady, in which Campion adapted Henry James very freely, with startling flights of visual fancy. Bright Star is strictly conventional by contrast, and while Cornish is very good, and Whishaw has some moments of sly wit (I liked particularly the bit comparing poetry to diving in a lake), the relationship comes alive only in flashes.

Partly the issue is the way Keats has been dramatized, which is to say: passively. Little of the man’s neuroses and fire and anger can be found here; he’s the human equivalent of a fainting couch, for Fanny to recline upon. I am in the minority on Bright Star. Judge for yourself. In its way Campion’s film is a thing of beauty, but its characters’ inner lives must be taken on faith.