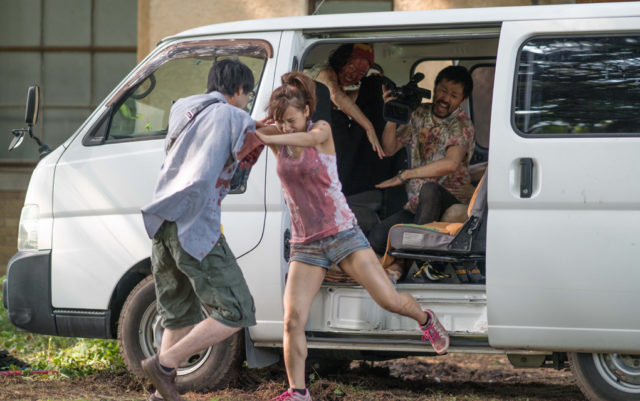 Somewhere in a remote part of Japan, a film crew is shooting a low-budget zombie movie in an abandoned World War II facility. The two leads are teen heartthrobs, and the director is of the megalomaniac variety. He can’t get the depth of the performance he wants from his actors and berates them; going so far as to smack one before he is asked to take a walk and cool off. That’s five, and the camera crew filming the movie switches off. But another camera crew, this one documenting the making of the movie, takes over. They capture the secret affair between the two leads, actors and make-up horsing around while waiting for the next shot to be set up, and the odd disturbances happening just outside.

If that’s enough for you, then stop reading now and let One Cut of the Dead reveal its secrets on its own terms. The movie won the Audience Award at the 2018 Fantastic Fest — arguably the only praise you need if horror-comedy is your bread and butter.

For those of you needing more, One Cut of the Dead is a meta-zombie-comedy, and it’s not like anything you’ve seen before. Once zombies start attacking the cast and crew making the aforementioned low-budget zombie movie, they have to fight to stay alive. All the while, the documentary crew refuses to turn the camera off, capturing the chaos and sticking close to the actors who must kill to survive. The result is one long, unbroken take lasting nearly 37 minutes. Then, the credits roll and the director yells cut. The movie we are watching ends, and now One Cut for the Dead truly begins.

Made for the paltry sum of $25,000 (3 million yen), One Cut of the Dead is the brainchild of filmmaker Shinichiro Ueda. Employing mostly first-time actors, Ueda shot One Cut over eight days in 2017. In 2018, it grossed $29 million (3.12 billion yen). Nothing returns on investment like genre cinema.

As that $25,000 figure should indicate, One Cut of the Dead is rough around the edges. The visuals have the soft haze of a TV movie and the actors broadcast their emotions with earnestness as big as billboards. One TV executive practically has a Cheshire cat grin plastered on her face while all her underlings nod along in awe.

Ueda leaves the nuances of One Cut to the material. As we see early on, the director (Takayuki Hamatsu) is the in-your-face, my-way-or-the-highway aggressive type. He’s the kind of director most envision when they picture the profession. But as One Cut reveals, he too is just a hired gun. He, just like all the rest of the cast and crew, is doing what needs to be done.

Everyone working on One Cut of the Dead does what needs to be done to get the shot. It’s not a celebration of a singular focus; it’s a celebration of the teamwork necessary to make even the smallest moment in a movie happen.