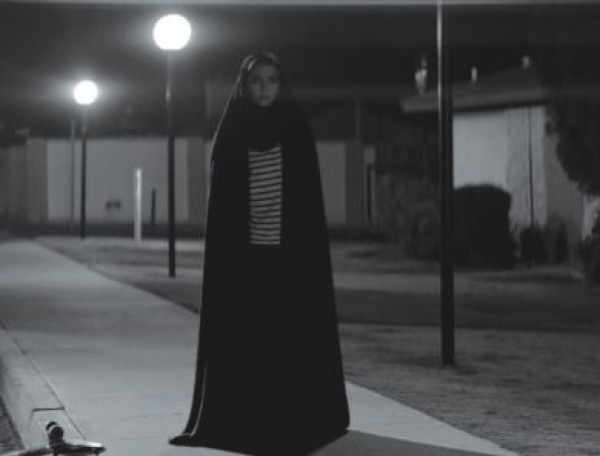 The fictional oil town of Bad City, Iran is, as far as we know, populated with pimps, prostitutes, drug dealers, drug users, a stray family member or two, a cat and The Girl (Sheila Vand). Casting a menacing shadow over this ghost town, The Girl rides a skateboard, coasting these deserted streets, her chador billowing out behind her like Dracula’s cloak, searching for prey.

The Girl is no ordinary girl, she is a vampire (how she became one or how long she has been one is never explained) and her supply of potential victims is dwindling. But the streets of Bad City are the perfect place for a vampire, because when she finds a victim, she can attack without repercussion. Their deaths are of no consequence to the people of Bad City. There are no investigations and no criminal charges are filed. Instead, their bodies are pushed into a ravine in the middle of town, one that is starting to become crowded. It’s business as usual in Bad City.
Whether or not Arash (Arash Marandi) knows who The Girl is — or what she is capable of — doesn’t really matter. He is attracted to her. Attracted in that distant, cool, blue jean, James Dean, let’s-just-listen-to-the-music, kind of way. Which is perfect, because that’s how The Girl feels about Arash.

When the two share the screen, they feel a lot but speak very little. It’s much more enjoyable that way.

Describing the plot of A Girl Walks Home Alone at Night, which is playing at the Sie Film Center starting Dec. 26, certainly drives home the unusual nature of the premise, but does not speak to how well the idea is executed. A Girl Walks Home Alone at Night is the feature debut from Iranian-American writer/director Ana Lily Amirpour and it is an impressive one. Equal parts spaghetti western, vampire film and Iranian New Wave, Amirpour doesn’t just bend genres; she gathers them up, tosses them in the blender and whips up a daring piece of filmmaking full of moody atmosphere and youthful ambition. Shot in shadowy black and white, with music that bounces back and forth between Iranian pop and Ennio Morricone, A Girl Walks Home Alone at Night isn’t just something off-center, it feels like a piece of work that only Amirpour could have concocted. This is what originality looks like.

The title may be cumbersome, but that’s nothing compared to its tagline as the first, “feminist Iranian vampire Western,” which, to be fair, is descriptive but comes close to labeling the movie with a political agenda. True, The Girl exclusively attacks men (men who are no friend to women) but save for one scene where The Girl tells a young boy (Milad Eghbali), “Be a good boy, or else!” A Girl Walks Home Alone at Night doesn’t seem to be overtly concerned with the larger aspects of gender politics in Iranian society. Instead, Amirpour is more interested in creating memorable and impressive images, and with A Girl Walks Home Alone at Night, she achieves her goal. The Girl with her black chador spread out behind her, resembling at once bat wings and a superhero cape, is a damn good one. One that will forever change the way I see a woman’s chador.