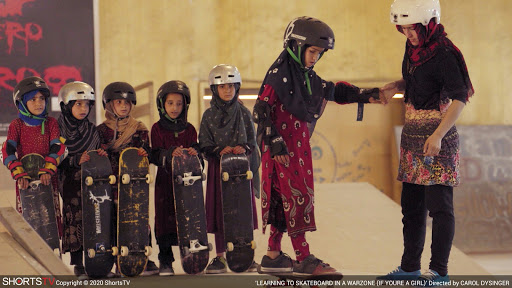 In addition to the praise and accolades each year’s Oscar nominations bring, there’s a fair amount of teeth-gnashing and viewers crying foul. A stupid movie got too much. Another didn’t get enough. My favorite didn’t get anything.

On and on it goes, from January’s announcement to February’s ceremony. Viewers take sides, draw lines in the sand, and reduce all 53 nominees into a meaningless two-party system.

Oddly enough, where moviegoers cross party lines lies not in the major categories but in the surprisingly popular short film categories: Animation, Documentary, Live Action. Each group boasts five nominees, and thanks to ShortsTV, all 15 will be screened in area theaters.

Of the three, this year’s standout category belongs to Live Action. Particularly Nefta Football Club, a comedy of errors set on the Tunisia/Algeria border that uses misdirection to evoke doom, before skirting it humorously at the last second. Nefta is strong enough on its own but would make a worthy anchor in an omnibus of like-minded shorts in the vein of Wild Tales or Everything You Wanted to Know About Sex But Were Afraid to Ask.

Other shorts in the program invert a commonly held notion about ISIS (Brotherhood, Tunisia); contemplate greener grass across the street (The Neighbors’ Window, U.S.); participate in the revolt of a women’s prison (Saria, U.S.); and follow an abducted woman as she tries to communicate with an emergency dispatcher (A Sister, Belgium). Solid work all.

True to form, the five documentaries nominated tackle dire topics with blunt honesty in a way that leaves you drained and, at times, despondent. From a protestor who took Black Lives Matter to the Missouri state government (St. Louis Superman, U.S.) to grave government incompetence that led to the needless sinking of a passenger ferry (In the Absence, South Korea). The bleakest of the five, Life Overtakes Me (Sweden/U.S.), follows the children of refugees who have gone catatonic with resignation syndrome.

Comparatively, the two docs with a bit of uplift, U.S.’s Walk Run Cha-Cha, and U.K.’s Learning to Skate in a Warzone (If You’re a Girl) sing the sweetest song. The former catches up with a Vietnamese couple currently living and dancing in Los Angeles after being separated for years by the Vietnam War. The latter — the best of the bunch — follows a teacher as she defies Taliban law and empowers young girls by teaching them to skateboard. It’s heart-warming and infuriating at the same time.

Animation, usually the strongest category of the three, feels the most pedestrian this time around. Daughter (Czech Republic), Memorable (France), and Sister (China), employ stop-motion animation while Hair Love and Kitbull (both U.S.) use hand-drawn animation. Those two are the most engaging of the slate, but Sister — dedicated to all the long-lost siblings of China’s one-child policy — is the one that sticks to the ribs the longest.

As a bonus, the Animation program includes three additional shorts, one of which — Hors Piste from France — might be the most enjoyable of the lot, and really ought to have been nominated. You see, everyone’s a critic.