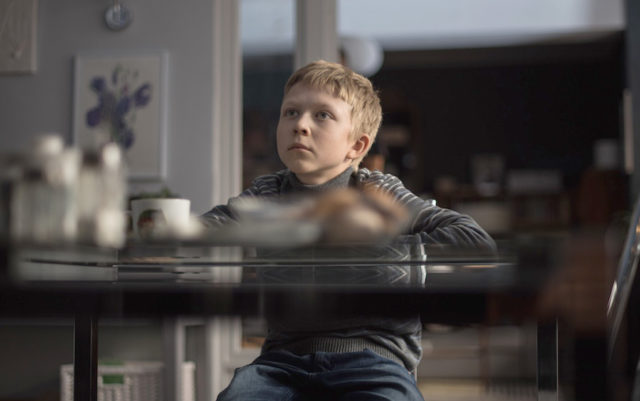 You can’t live your life in lovelessness,” the ex-wife tells her new boyfriend. We agree, that’s certainly true. But we also know there is a touch more excuse in her rationale than reason. Like the Joneses down the street, she has left one marriage for another. Why? Maybe it’s love, maybe it’s sex or maybe it’s just something new. Lovelessness, we question as we watch the children carry out cardboard boxes of stuffed animals, or selfishness?

For filmmaker Andrey Zvyagintsev, the answer lies in the latter. Set in 2012, Loveless revolves around the divorce of Zhenya (Maryana Spivak) and Boris (Aleksey Rozin), a middle-class couple of 13 years who couldn’t hate each other more. Stuck in the middle is Alyosha (Matvey Novikov), their only child and the reason neither left a long time ago. That won’t stop them now. They even discuss sending Alyosha to an orphanage rather than compromise on custody. A happy marriage this is not.

Yet, nothing seems out of the ordinary. Boris is coached by a co-worker on how to quickly divorce and start a new family so he won’t be terminated by his fundamentalist Christian employer. Equally excited to start her second relationship, Zhenya spends so much time at her boyfriend’s house that when she finds out Alyosha is missing, she realizes he’s been missing for two days. And where is Boris? At his pregnant girlfriend’s apartment — she’s in her third trimester and already grinding his gears.

Yes, Zhenya and Boris are aggravating protagonists, repulsive even, but Zvyagintsev isn’t interested in simply throwing them under the bus. His aim is much more systemic. In one of the movie’s most telling scenes, a woman exits a restaurant bathroom and is told how beautiful she is by a stranger. She smiles and the man asks for her number. She gives it, and her name, before walking back to her table and to her date. Apparently, infidelity is Russia’s worst kept secret.

Who then are the loveless? Alyosha, the son Zhenya and Boris never wanted and don’t know what to do with? Yes, he certainly is loveless, forgotten and unwanted, but so too are the other children — constantly off-screen and seemingly forgotten by a generation of adults so self-absorbed they can’t be bothered to watch out for them, let alone raise them.

It’s a blunt point, but considering Loveless hits U.S. theaters mere weeks after a school shooting in Parkland, Florida, it’s a timely one as well. Once again, adults stood by while children were slaughtered, and once again those same adults refuse to make changes to ensure the safety of future children.

We will never know what the future holds, but we will always know how we got there. Who knows what the next generation has in store for us, but we’ll certainly be able to look at these moments and know why they really don’t like us: Because we didn’t protect them from predators any more than we stopped the mentally ill from getting their hands on an AR-15. We’re giving them plenty of reasons to hate us.