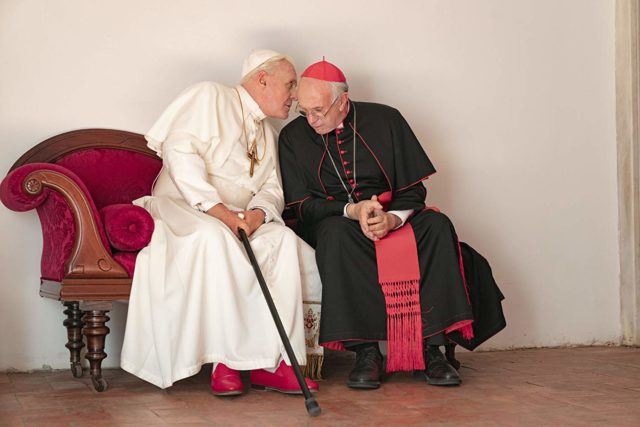 Truth is one, but the sages speak of it by many names. —The Rig Veda

The Two Popes, one of the most anticipated movies of the holiday season, arrives on the silver screen Dec. 13 before heading to Netflix on Dec. 20.

Directed by Brazilian filmmaker Fernando Meirelles, The Two Popes opens in 2005, with the election of Joseph Ratzinger (Anthony Hopkins) as Pope Benedict XVI, and closes in 2013 with the resignation of Ratzinger and the election of Jorge Bergoglio (Jonathan Pryce) as Pope Francis. Using a blend of archival footage and narrative designed to look like documentary, Meirelles captures the energy and urgency of The Two Popes’ core debate: The intersection of change and compromise.

Meirelles stages these rhetorical tête-à-tête as dramatically as action. The progressive Bergoglio understands that the church has failed millions, and wants to open the doors with apologies and admissions of guilt. Ratzinger, a conservative, also wants to apologize, but the sanctity of the church is first and foremost. He will do nothing to discredit her, even if that means turning a deaf ear toward a screaming reality.

Fortuitously, there is another classic of Catholic discourse screening Dec. 13, one that also happens to be available for home viewing from Olive Films: 1945’s The Bells of St. Mary’s starring Bing Crosby as Father O’Malley, the newly appointed priest of the K-12 school, St. Mary’s, and Ingrid Bergman as Mary Benedict, the school’s Sister Superior.

The Bells of St. Mary’s finds Benedict and O’Malley up against a deadline. St. Mary’s is to be condemned and sold to developer Horace P. Bogardus (Henry Travers — Clarence from It’s A Wonderful Life), a man who plans to pave paradise and put up a parking lot for his sparkling-new office tower next-door. But no one occupies Bogardus’ tower, nor does it appear that he built it for anyone other than himself. Benedict and O’Malley hatch a plan: Convince Bogardus to bequeath the building to St. Mary’s. Benedict, ever a woman of habit, turns to prayer. O’Malley, willing to descend into the particular, knows there are other ways to get what you need.

Much like The Two Popes, The Bells of St. Mary’s is an exercise in casuistry, the Jesuit practice of foregoing principals, and treating problems on a case-by-case basis. Benedict, both the pope and the sister, use faith and prayer in all situations, even when they hit a wall. The Jesuit Bergoglio and O’Malley are more pliable with their sophistry. And more effective.

Cinema is an exercise in casuistry: A case-by-case, movie-by-movie exploration of truth and morals. But how best to present this discourse? As an iconoclast addressing the problem directly? Or as a smuggler walking a more circuitous path?

The best cinema blends both, synthesizing image and sound to address both the head and the heart. When it works, it achieves a spiritual component. And The Two Popes and The Bells of St. Mary’s work. Two conflicts, four players. They all seek a shared goal, but it is their willingness to defend their positions that make these films so beautifully Catholic.

ON THE BILL: The Two Popes is currently on Netflix.
A new Blu-ray of The Bells of St. Mary’s is available on Blu-ray from Olive Films.