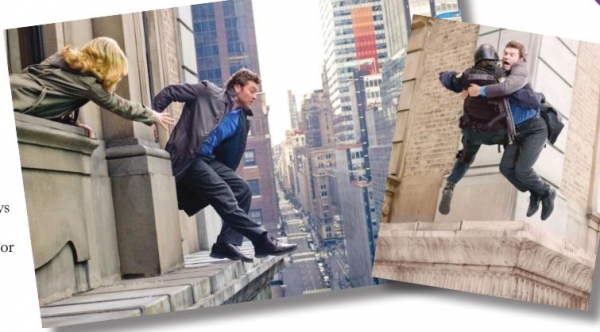 A man edges along the 21st-story ledge of a midtown New York City hotel. He’s an ex-cop and a convicted thief on the lam, straight out of Sing Sing, and he’s threatening suicide. Sam Worthington, of Avatar and Clash of the Titans, plays this character, Nick Cassidy, and it is odd to see Worthington on a precipice without winged beasts or blue friendlies buzzing about his head. The only thing buzzing in Man on a Ledge are little gnats of narrative improbability.

Like the more antic Tower Heist a few months back, Man on a Ledge exploits populist rage against corrupt bazillionaires as it spins a tale of a high-risk revenge burglary in the high-rent Manhattan district. Unlike Tower Heist, though, Man on a Ledge confines its protagonist to a thin sliver of concrete for much of its 102 minutes. While Nick is up to something out there, on the ledge, a police negotiator played by Elizabeth Banks argues with another cop (Edward Burns, doing what he should be doing for a living — acting, that is, instead of writing/directing) about how to talk him down. Banks is a skillful actress, particularly in comedy, but she doesn’t easily suggest “hard-bitten.”

You can say this for screenwriter Pablo F. Fenjves’ story: It stays busy. It starts in the hotel, moves to the ledge and then swoops back into a one-month-earlier flashback, explaining how Nick got there, why he went to prison in the first place and how he managed to turn a furlough for his father’s funeral into an opportunity for escape. Nick asserts his innocence regarding the theft of the $40 million Monarch diamond, the one owned by a monster capitalist played, or rather sniveled, by Ed Harris.

So many details eat away at our engagement with this picture. Why wouldn’t the negotiator notice Nick has an earpiece and a habit of murmuring aloud? Why does the distance between the ledge and the pavement seem to vary from shot to shot, depending on whether we’re watching actor-harnessed action filmed on location or actors doing their thing on a mock-up of the location? Why does the guy in the crowd below holler “Attica! Attica!” as if that weren’t one of the signature moments from Dog Day Afternoon?

Jamie Bell plays Nick’s younger brother, in cahoots with his fiance, Genesis Rodriguez, whose preferred heist wardrobe is the Salma Hayek lingerie line from After the Sunset. Anthony Mackie, a terrific actor, brings some artful ambiguity to the role of Nick’s colleague from his police force days.

Danish director Asger Leth gets the job done with minimal style and a generally indistinct tone. The supporting players in Man on a Ledge bring more to the party than the leads, and my suspension of disbelief seems to have gotten hung up in traffic while attempting to cross the suspension-of-disbelief bridge from the Brooklyn side.