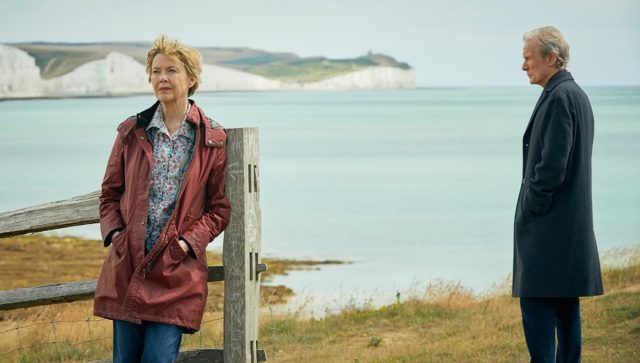 I have been here before,
But when or how I cannot tell:
I know the grass beyond the door,
The sweet keen smell,
The sighing sound, the lights around the shore.

Those are the first lines of “Sudden Light,” a poem by Rossetti — a favorite of Grace (Annette Bening). She collects poems because they make her feel less isolated. Her husband of 29 years, Edward (Bill Nighy), collects history texts and updates wiki pages, because he needs to correct the mistakes of others. He speaks little; she speaks mostly in barbs.

Theirs is not a happy marriage, but it’s familiar. Grace and Edward have one adult son: Jamie (Josh O’Connor), a young man in a rapidly ending relationship. Grace’s relationship is also rapidly ending. Edward has found another, probably for the better. Grace feels betrayed. She’s always loved Edward. At least, she thought she did. Well, she said it anyway — that counts for something. Doesn’t it?

Hope Gap, an English family drama from writer/director William Nicholson, is a quiet analysis of two people who never belonged together. The movie is told entirely in the present, and we see nothing of their early days: If they were happy together, or if they weren’t. Certainly, they had some happy days, but they were few and far between. And as life progressed, they grew further and further apart. Reality set in: Grace wanted something, and Edward was close enough. Edward didn’t know what he wanted and took direction easily.

Somewhere along the way, they both found themselves. And they found that the person they wanted to be was not the person they had become. When Grace confronts Edward at the home of his girlfriend, she’s ready to make a scene. But then she looks around the living room and sees nothing resembling their life together. “This is what you wanted all this time?” she asks with condescension. And, in almost the same breath, she realizes that the man before her is nothing like the man she thought he was: “You must have been miserable.”

Without Bening, Hope Gap wouldn’t work. Her accent is off-putting, but her performance is a tightrope act of shrill pettiness masking vulnerability. Nighy is equally good: Slender, slight and crumpled. His whole body looks like it’s weathered her storm. You kind of feel happy for him when he gets out. In later scenes, he even looks younger.

Both characters feel fully realized, as does the son, Jamie. There must be a sliver of autobiography here; otherwise, the whole thing would topple over into theatrics, hysterics and clear-cut winners and losers. Instead, Nicholson leaves all that crashing energy out along the white cliffs of Hope Gap, an overlook point the three of them frequent.

There are no winners in a divorce. No losers, either. Just a narrowing sense of loneliness disconnecting you from all the good in the world. At first, it seems eternal. But, as Grace tells Jamie: “After a while, it stops being interesting.”

The pain dulls, the grass greens and grows, poetic words once again fill the soul and life goes on.