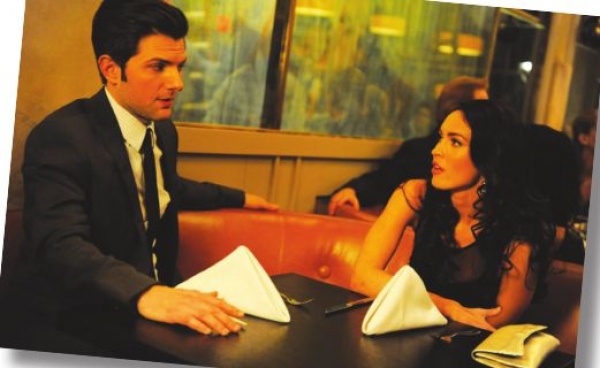 When an idiosyncratic talent seeks a wider audience for her work, there’s a danger in trading the offbeat for something more on-the-nose. This is what has happened in Friends With Kids, a smooth but frustrating third feature with an extremely good ensemble cast. In writer-director-star Jennifer Westfeldt’s previous directorial screen works, Kissing Jessica Stein (2002, adapted from a play) and Ira & Abby (2007), Westfeldt found some very funny details in her tales of New Yorkers slouching toward love. The filmmaker favors the comic long shot. Here the collective long shot is played by Westfeldt and Adam Scott. Friends since college, foundation staffer Julie and advertising executive Jason live on different floors of the same rent-stabi lized wonder of an apartment complex. They’ve come to know each other’s every quirk and eccentricity.

Since their married friends have morphed into shrill shadows of their former selves, they wonder: Is it possible to bring children into your life without destroying the possibility of romance? Only one way to find out: Tackle the former without even a whiff of romantic expectation. Julie and Jason decide to have a child and to raise the boy, named Joe, 50-50, with no hope of a real relationship between them. This arrangement, they figure, allows them to find their true loves. It’s like a starter marriage without the marriage.

Their friends’ responses to the setup range from skeptical to cynical. Jason’s eventual girlfriend, a Broadway chorus dancer played by Megan Fox, has no interest in parenting. Julie finds a winner in a divorced father played by Edward Burns, yet something — someone — is preventing her from committing. The married-and-exhausted couples are portrayed by Jon Hamm (Westfeldt’s longtime partner off screen) and Kristen Wiig, and by Maya Rudolph and Chris O’Dowd. That’s a lot of talent, most of which helped make Bridesmaids worth seeing.

Flashes of wit brighten the proceed ings here, as when Julie bemoans being set up for a date by Rudolph’s character. “He’s a criminal!” she objects. Rudolph’s reply: “White collar! You can make that work!” Often, though, the banter among these generic folk gets stuck in neutral. Jason is near-fatally smug. The script features exactly one brief conversation about money (everybody has plenty here). Julie and Jason prove to be such fabulous co-parents and so inevitably a couple, the film should have been called A Matter of Time.

Whatever their underlying seriousness or fundamental frivolity, all romantic comedies are plainly that — matters of time, delay mechanisms obstructing, and then joining, the key characters. But compared with Westfeldt’s more interesting previous films, this one really is simply a matter of time.