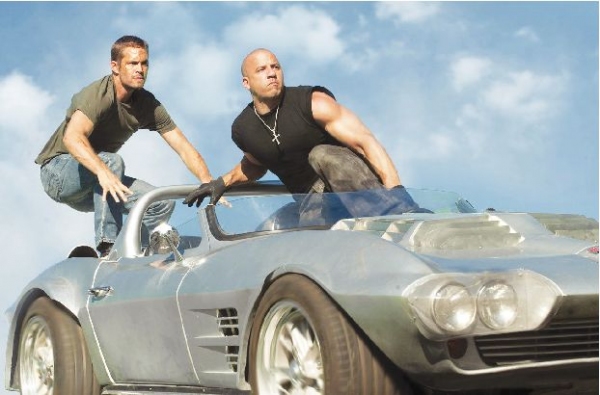 Things blow up right and left, muscle cars are pulverized, sexpots vamp and brawny men wallop the tar out of one another. Yet there are enough pauses between adrenaline-packed driving sequences, shootouts and explosions to make room for three romance subplots and two babies. Here’s a summer popcorn flick strong enough for a man and gentle enough for a woman.

The story, such as it is, begins with an exhilarating escape from a prison-bound police bus that rivals the spectacular train wreck opening of The Fugitive. Cut to Rio de Janeiro, where road-racing bandits Vin Diesel, Paul Walker and Jordana Brewster join in a train robbery that ends with them wrongly accused of killing several DEA agents. With vengeful FBI agent Dwayne Johnson now on their tail, they plan a $100 million caper that will allow their team to move to countries with no extradition and no speed limits. Like a grease monkey Ocean’s Thirteen, the film reassembles the cast of earlier installments, with Chris “Ludacris” Bridges, Tyrese Gibson and Sung Kang back on board.

The film is handsomely and atmospherically shot in gritty hillside slums and backstreet garages. This is not the bikinis-and-palm-trees tourist-guidebook Rio. The story makes only one excursion to the city’s beaches, and it’s a treat. A leggy member of Diesel’s crew does a Girl from Ipanema act in order to obtain a crook’s handprint needed to open a high-tech safe. Her hands-on approach is more fun than lifting his fingerprints off a doorknob, so you give the pandering scene a pass.

It’s a bigger stretch to ignore the fact that the crooks level half of Rio street-racing with the policia in the finale. The staggeringly destructive sequence stops just short of toppling the Christ of the Andes from his mountainous perch.

With performances that are adequate at best and stunts that defy the laws of physics, Fast Five flouts every rule of good filmmaking but one — it’s never dull. Thankfully, director Justin Lin, who filmed the previous two installments of the Fast quintet, makes the proceedings noisy, chaotic, shameless fun. His extravagantly budgeted stunt scenes are so crisp and thrilling that you’re willing to forfeit sharp storytelling and interesting characters.