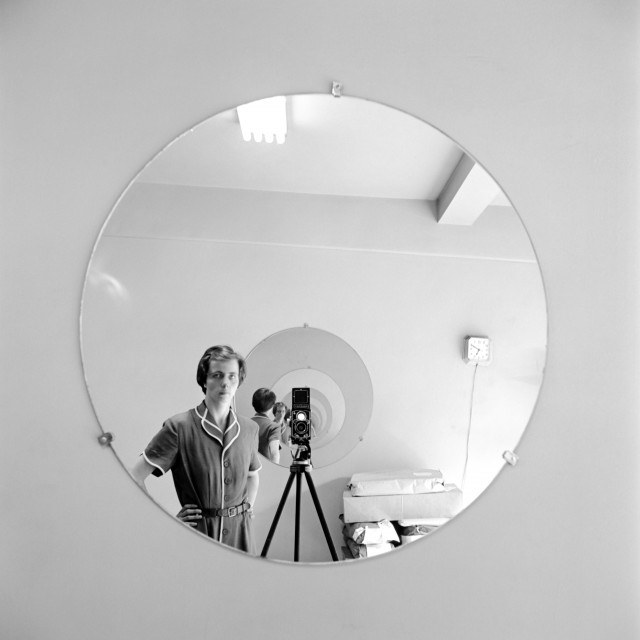 Paradoxical.” “Bold.” “Mysterious.” “Eccentric.” “Private.” Five words to describe the subject of the new documentary Finding Vivian Maier. Who was Vivian Maier? A maid and nanny for families in the Chicago area. Why is everyone talking about her? Because Maier was arguably the 20th century’s most prolific and talented street photographer, she just didn’t bother to tell anyone.

Maier’s rise to fame began at a storage auction house in 2007, shortly before her death in 2009. An amateur historian, John Maloof, was working on a book about Chicago and needed archival photographs. He bid blindly on a box of negatives and won. Maloof had never heard of the photographer listed on the negatives (Maier) and tried to dig up information on her, but came up blank. Yet, the more Maloof inspected the negatives, the clearer it became that someone quite talented, possibly professional, took the photos. With little to go on, Maloof began a search to uncover who Maier was.

Maloof dug through articles, receipts and mail to track down the families she worked for. He visited the children (now adults) she once cared for and began to piece together an idea of who this brilliant artist was. Though Finding Vivian Maier is a documentary, Maloof plays it like a classic detective story. He addresses the camera, provides narration and records himself at work, allowing us to join him through every strange twist and turn of the story.

Maloof uncovers a portrait of an odd, obsessed woman, constantly taking photos of people on the street, documenting the daily life surrounding her. Maier was never without her trusty Rolleiflex camera and she never passed up a shot. One of the interviewees recounts a time a child Maier was watching was hit by a car. He remembers that Maier did not panic over the health of the child, or even the safety of her job; she was too preoccupied snapping pictures. She took pictures of the accident, of the police, of the people standing around, and not for any purpose other than it all made for a great shot. This story might sound a touch embellished, benefitting from an imaginative memory, but it wasn’t, and Maloof has the pictures to prove it.

Maier also made home movies. In some, she talks to the children she cares for. In others, she talks to people on the street. Maloof singles one out that perfectly describes the paradox that was Vivian Maier: Maier exploring an area where a babysitter was murdered. Maier retraces the steps where the woman found the job posting, the neighborhood where the woman was likely murdered and stops by the funeral home where the services were held.

“She’s kind of a journalist of the area,” Maloof says. “But usually you do that to show people. She just didn’t.”

Maier shot thousands of photographs and hours of film and never showed anyone. She just kept taking photos and storing the negatives away. Shot after shot, box upon box.

Many of those shots are now on display in museums and galleries in major U.S. and European cities with plans of a traveling show. Finding Vivian Maier will run at The Dairy Center for the Arts from Wednesday, May 7 to Saturday, May 10. Tickets and show times can be found online at www.thedairy.org

Academy Award Nominee Jake Gyllenhaal reteams with his Prisoners director, Academy Award nominee Denis Villeneuve, in this sexy and hypnotically surreal psychological thriller that breathes new life into the doppleganger tradition. Adam Bell (Gyllenhaal) is a glum, disheveled history professor, who seems disinterested even in his beautiful girlfriend, Mary (Mélanie Laurent). Watching a movie on the recommendation of a colleague, Adam spots his double, a bit-part actor named Anthony Clair, and decides to track him down. The identical men meet and their lives become bizarrely and irrevocably intertwined. Gyllenhaal is transfixing as both Adam and Anthony, provoking empathy as well as disapproval while embodying two distinct personas. With masterfully controlled attention to detail, Villeneuve takes us on an enigmatic and gripping journey through a world that is both familiar and strange — and hard to shake off long after its final, unnerving image. At Boedecker. — Boedecker Theater

Not much was known of photographer Vivian Maier until 2007 when her work was discovered at an auction house in Chicago. The find unleashed a treasure box of photographs taken between the 1950s and 1990s by Vivian, a nanny, who lived between France, New York and Chicago during her lifetime. The filmmakers inter view dozens of people who knew Vivian and unlock the mystery of a photographer who exposed some of the greatest street scenes and faces of the 20th century. At Boedecker. — Boedecker Theater

Darwin meets Hitchcock in this featurelength documentary. The Galapagos Affair is a gripping tale of idealistic dreams gone awry, set in the brutal yet alluring landscape of the Galapagos Islands. Featuring voice-over performances by Cate Blanchett, Diane Kruger, Connie Nielsen, Sebastian Koch, Thomas Kretschmann, Gustaf Skarsgard and Josh Radnor, this film skillfully interweaves an unsolved 1930s murder mystery with stories of present day Galapagos pioneers (a handful of Europeans, Americans and Ecuadoreans who settled idiosyncratically on the Islands between the 1930s and 1960s). As such, it is a parable about the search for paradise — about what happens when a handful of individualists settle on the same small island seeking their own distinct and sometimes clashing notions of Eden. At Boedecker. — Boedecker Theater

Living in a comfortable retirement community in Southern Oregon, estranged from her family, unsatisfied with her surroundings, and generally not happy about life, Marie decides to journey 80 miles on foot to the coast of Oregon to see the ocean for the first time in 45 years and attend her granddaughter’s wedding as an unexpected guest. Along the way, she meets an extraordinary cast of characters and discovers that you’re never too old to learn something about life and about yourself. At Boedecker. —Boedecker Theater