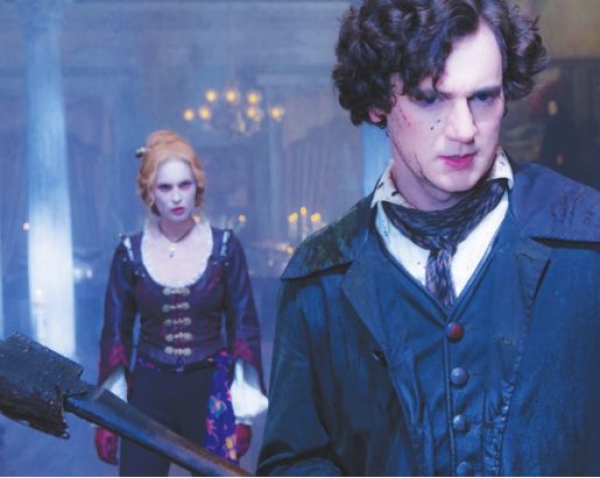 I’m sick of the sparkly, romantic vampires that are haunting popular cinema, which is why I really enjoyed the historical mashup Abraham Lincoln: Vampire Hunter.

It posits a Civil War era where Southern slave owners are vampires, while the North fights not just for freedom for slaves but also freedom from the enslaving clutches of the vampire hoard.

In Abraham Lincoln: Vampire Hunter, I delighted in the historical facts woven into the narrative and the bad-ass ninja Abe portrayed on screen by Benjamin Walker, spinning his silver axe blurringly fast as he kills vampires left and right. With splendid special effects and visuals, it also highlights the considerable talents of director Timur Bekmambetov and producer Tim Burton.

The story starts with Abe as a young boy (played by Lux Haney- Jardine) working on the dock with his father Tom (Joseph Mawle). Slave parents are dragged onto a boat as the young boy Will (Curtis Harris, played later as an adult by Anthony Mackie) fights to stay with them. When he’s pushed down and beaten, young Abe runs to his rescue, just to be whipped too. Dad isn’t OK and intervenes, then slaveowner Jack Barts (Marton Csokas) stops the fracas and swears to take revenge. And he does, killing Abe’s mother Nancy (Robin McLeavy) while Abe watches, peeking through the bed slats. Revenge!

Abe bumps into the mysterious and charismatic Henry (Dominic Cooper), who promises to teach Abraham how to be a vampire hunter if Abe pledges to kill the vampires Henry identifies, not just go after Barts. Abe learns how to channel his anger into a single task: killing vampires. He chops down a tree with a single stroke of his weapon of choice, a silver-plated axe, and rapidly evolves from a hick woodsman into a ninja killer. Along the way, much of the real story of Abraham Lincoln is woven into the movie, including when he moves to Springfield, Mo., and meets Mary Todd (Mary Elizabeth Winstead), though at the time she’s engaged to fiery politician Stephan Douglas (Alan Tudyk). She falls in love with the lanky, mysterious Abe, even though he’s just a shop clerk working for the entrepreneurial Speed ( Jimmi Simpson) while studying the law. By night, Abe has to balance out his courtship with his vampire hunting efforts.

What I found most enjoyable about Abraham Lincoln: Vampire Hunter wasn’t the action sequences or special effects, however, but the way that the production team wove in so many historical figures from the era, including Underground Railroad slave emancipator Harriet Tubman (Jaqueline Fleming) and Confederate leader Jefferson Davis ( John Rothman), along with a short vignette from the Lincoln/Douglas debate. Lincoln also gives his famous Gettysburg Address.

And the last scene? You’ll laugh at the irony and historical inevitability of it all.

I didn’t expect to like this film very much. Most of these historical mashups seem daft to me, but I walked out of Abraham Lincoln: Vampire Hunter pleasantly surprised and highly entertained. It’s a throwback to an era of vampire movies that were witty and engaging while also being scary and populated by smart, scary, vicious vampires you did not want to have at your parties or visiting your place of business. Nicely done. Go see it and enjoy!