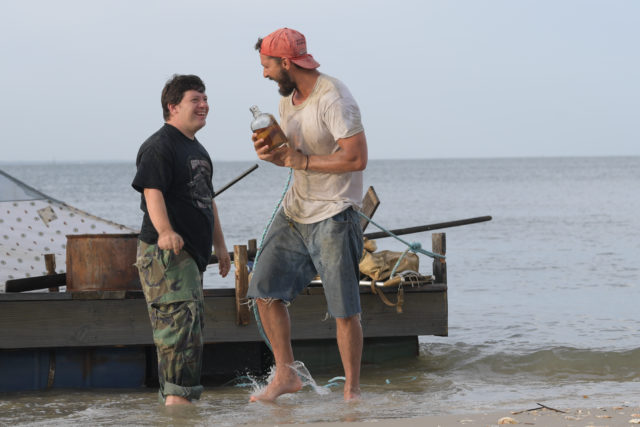 Stories of how movies get made are as varied as the movies themselves. For Tyler Nilson and Michael Schwartz, two first-time writer/directors, the story of their debut feature goes back 13–14 years to an apartment building along the Santa Monica beach where the two were neighbors.

“I had just ridden my bike across the country, and I was like: ‘I want to make movies,” Schwartz says.

Commercials really. Nilson had a similar goal, but his interest was surf films and acting. Neither dreamed of feature films, but both liked working with each other.

Fast-forward five years and the two met Zack Gottsagen, a “person with Down syndrome,” to use Gottsagen’s parlance, at a camp for people with and without disabilities.

“He had been acting his whole life and wanted to be a movie star,” Schwartz says. “It was his idea to make this film.”

That film, The Peanut Butter Falcon, stars Gottsagen as Zak, an escapee from his North Carolina nursing home. Wanting to be a professional wrestler, Zak gives his caretaker (Dakota Johnson) the slip, searches for The Salt Water Redneck (Thomas Haden Church) for lessons and crosses paths with Tyler (Shia LaBeouf), a down-on-his-luck fisherman.

Winner of the audience award at 2019’s South by Southwest Film Festival, The Peanut Butter Falcon, is a feel-good story wrapped around a Mark Twain yarn. Nilson uses the word “sweet” to describe both Gottsagen in real life and his character. Schwartz focuses on the film’s tone, which is honest and authentic.

But eight years ago, Nilson and Schwartz didn’t have anything more than Gottsagen and an idea. Thanks to a trip to the library, the two became self-taught writers. But without industry connections, they were still dead in the water.

“We’re nobodies, man,” Nilson says with sincerity. “I was living in a tent. I was homeless at the time. We had a script that we knew, in our hearts, was really good. But other than that, we had nothing. Truly nothing.”

Then, in late 2015, actor Josh Brolin posted on Instagram that his New Year’s resolution was to help people. So, Nilson and Schwartz sent him their script, and Brolin got the ball rolling. Before they knew it, Nilson and Schwartz had producers and actors ready to join their maiden voyage and work alongside Gottsagen.

“He’s incredibly present,” Schwartz explains, pointing out that most of Zak’s dialogue comes courtesy of Gottsagen.

“We knew he was talented,” Nilson says, “and we had to cleave out a way to show the world his talent.”

“He has his own sort of charisma,” Schwartz adds. “The actors really responded well, and instantly became friends off-camera.”

Watching Gottsagen on camera, it would be hard not to.