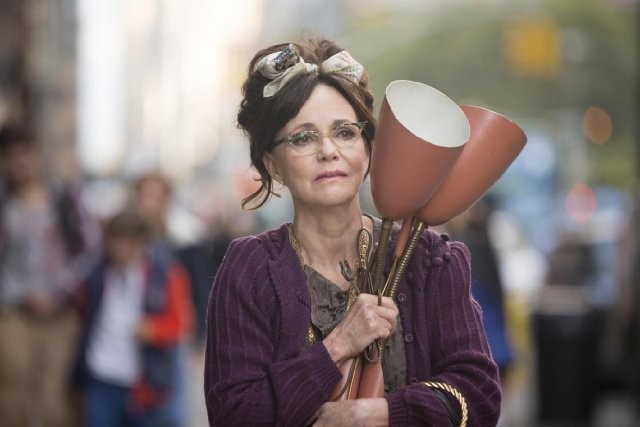 In the conventional sense, Doris (Sally Field) is a spinster. She lives in the same Staten Island house she grew up in — with her cat and 60 years of an accumulated past — and has more or less shut herself off to the world. With the exception of her longtime friend, Roz (Tyne Daly), Doris has little to no contact with the outside world, including her relationship with her brother that has been strained for years and is reaching a breaking point. Her co-workers call her shy, but Doris is more than that, Doris is taciturn.

Well, that is just one way of looking at it, and the new film, Hello, My Name is Doris posits a different take on the character. New York City is bustling with transplants and youngsters positively enchanted by anything unique, vintage or handmade, and Doris is that in spades. When Doris falls for her new boss, the much younger John (Max Greenfield), she ventures out to Williamsburg to hopefully cross paths and catch his attention. She does, but even more so, Doris catches the attention of the Williamsburg hipsters. Even though they are 30 years her junior, Doris fits in for the first time in decades. A garishly neon outfit may look ridiculous at her brother’s upper-middle class home, but it fits right in at the EDM club. Her cat-eye glasses and mismatched poodle skirts are all the rage, she knits — which all the girls are doing — and people make their own, well, everything. It’s almost as if Doris doesn’t fit in with the hipsters, but the hipsters fit in with Doris.

Yet, Doris doesn’t simply mesh with these youngsters because they have a predilection for the past, but because they are just as shy and pained as she is. Everyone around Doris is sincerely trying to be themselves while simultaneously trying to fit in with the larger group. This is most evident in John, whose work has recently relocated him from California. John needs a friend he can go out with and confide in and Doris’s Harlequin romance-fueled fantasies need a leading man.

Doris’s infatuation with John is primarily her own creation, but it is not unfounded. John is kind, open and honest with Doris, and in a bustling and often uncaring metropolis, kindness is commonly mistaken for attraction. Director Michael Showalter — who co-wrote the screenplay with Laura Terruso — mines these awkward moments for humor, but doesn’t turn Hello, My Name is Doris into a typical comedy. Pregnant pauses and awkward silences take the place of witty banter, loosening up many of the scenes and steering the audience away from expecting typical comedic resolution. Instead, Showalter offers the audience a coming-of-age tale, with a 68-year-old Sally Field at the center.

And it fits Field like a glove. Watching her indulge in this character — be it the small tribulations of growing older, dancing to silly music or the pleasure of someone discovering purpose in the second half of life — is what makes Hello, My Name is Doris enjoyable for audiences of any age.