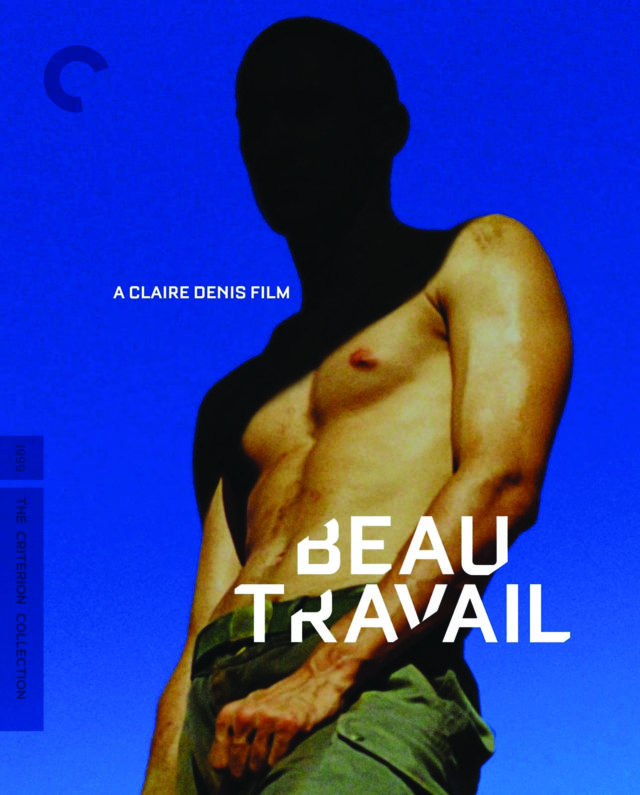 Released at the tail end of the last century, Beau travail was filmmaker Claire Denis’ fifth film: the one that launched her onto the world stage and established her as one of the key cinematic voices of this century.

The emphasis on chronology isn’t arbitrary: Beau travail (French for “good work”) is a loose adaptation of Herman Melville’s unfinished novella, Billy Budd — written in the 19th century, published in the 20th — and a spiritual sequel of Jean-Luc Godard’s 1960 film, Le petit soldat. At the end of that film, Bruno Forestier (Michel Subor) flees the French-Algerian war and the world of double agents. Forty years later, Bruno (still played by Subor) resurfaces as a French Foreign Legion Commandant stationed in Djibouti in Beau travail.

The return of Bruno is one of many resurrections in Beau travail. Denis pulls the past to the present and confronts it with a poetic and inquisitive gaze.

The legionnaires train under Bruno’s watchful, but distant, eye. The grunt work of day-to-day training is left to Sergeant Galoup (Denis Levant), who becomes suspicious of Sentain (Grégoire Colin) once Bruno expresses an interest in the young legionnaire. Galoup’s face is craggy and pockmarked; Sentain’s is smooth and sculpted. You could say that the underlying tension between Galoup and Sentain is homoerotic, and you’d be right. You could also say it smacks of Snow White with Galoup as the Evil Queen and Sentain as the fairest of them all.

Galoup and Sentain bicker and fight, and Denis and cinematographer Agnès Godard eschew their masculine bravado by stripping it of violence and choreographing their movements. When one strikes the other, the punch is slowed to the point of softness. When they perform calisthenics with the rest of the legionnaires, the motions look like ritualized worship. It gives the men a spiritual quality, but it also gives them sensuality.

The results are hypnotic and dreamy, and Beau travail would have floated away if Denis had not grounded it by pulling on strands of African colonization and populating the frame with foreign faces in captured spaces. A feeling no doubt familiar to Denis, who was born in Paris but raised in colonial French Africa — her father was a civil servant stationed in West Africa.

It all works, but it is the movie’s final scene that brings everything home. Without hesitation, it is one of the most ecstatic endings in all of cinema, a moment where 90 minutes of tension and rigor release with a flurry of motion and music: A curtain call like no other.

Janus Films’ stunning 4K restoration comes to CU-Boulder’s International Film Series’ virtual theater on Sept. 4. On Sept. 15, The Criterion Collection releases a Blu-ray and DVD set — including interviews with Levant and Colin, a video essay from film scholar Judith Mayne, a written essay from critic Girish Shambu, and a conversation between Barry Jenkins and Denis. And on Sept. 29, TCM screens Beau travail as part of their 14-week series, Women Make Film.