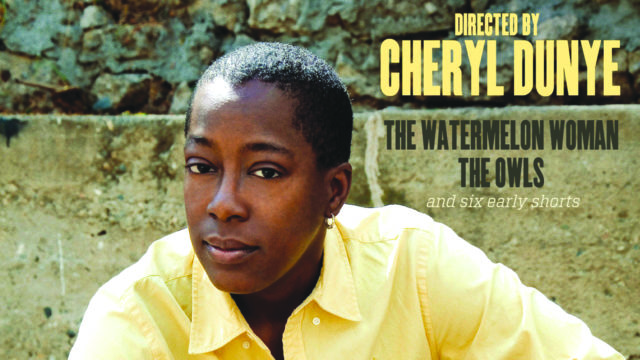 Sometimes you have to create your own history. —Cheryl Dunye

She calls them “Dunyementaries”: Cinematic blends of fiction and documentary, construction and confession. They’re self-reflexive works — existing somewhere between personal diary and public exhibition. They’re primarily concerned with gender, race, sexual orientation and desire, but they also take a playful approach to the truth; history with the suggestion of manipulation.

Born in Liberia and raised in Philadelphia, Cheryl Dunye began her career at the tail end of the 1980s, right as the New Queer Cinema was putting down roots. Queer cinema had existed for decades, but mostly in Europe and in the underground cinema of the American independent scene. By the time critic B. Ruby Rich coined the term “New Queer Cinema” in 1992, the underground found its way up, and filmmakers like Dunye were at the forefront. Using emerging video technology, her work had the disarming aesthetic of a home movie paired with classic narrative construction.

Video works wonders for Dunye. Her films present a world you might assume is autobiographical, but there’s no telling if what you are seeing and hearing is truth or construction. You’ll find it in all of her work, but it’s most evident in Dunye’s 1996 feature debut, The Watermelon Woman, with Dunye playing herself — or a reflection of herself — a gay Black woman living in Philadelphia becoming a filmmaker. In addition to odd jobs as a wedding videographer, Dunye works in a video store where she meets Diana (Guinevere Turner), who is white. The two start a relationship, much to the chagrin of Dunye’s friend, Tamara (Valarie Walker), who is Black and wonders why Dunye is carrying on a relationship with a white woman. Dunye wonders herself, but when she finds out Diana has had multiple Black boyfriends, Dunye stops wondering where Diana fits in her life and starts wondering where she fits in Diana’s past.

It’s not the only past Dunye is concerned with: She’s stumbled across a Black actress from Hollywood’s Golden Age credited only as “The Watermelon Woman.” Dunye goes digging, discovers her name, Fae Richardson, and discovers that Richardson was also gay and also in a relationship with a white woman, film director Martha Page.

But neither Richardson nor Page was real: Dunye (the director) conceives them whole cloth, further refracting the reality of her video diaries. Even the convincing archival photographs and Hollywood footage Dunye uses (created by New York City-based photographer Zoe Leonard and starring Lisa Marie Bronson as Richardson) are faked.

The Watermelon Woman isn’t the first time Dunye played fast and loose with the truth, picked apart her past sexual experiences, and drew the viewer’s attention to the construction behind the camera. Her early shorts, Vanilla Sex, She Don’t Fade and The Potluck and the Passion, show the building blocks of The Watermelon Woman while remaining decisively individual. Each work feels like something Dunye pulled from her guts while retaining a beginner’s mischievousness: The kind that comes from picking up a camera and realizing that it can’t reflect everything, only a portion of everything. And that whoever holds the camera gets to decide what gets reflected. Maybe even manipulated.

The Watermelon Woman and six of Dunye’s shorts are streaming on The Criterion Channel.