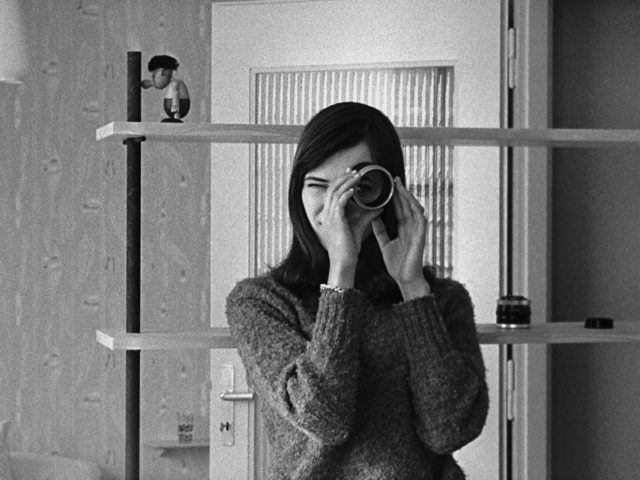 No one face embodied the French New Wave more than that of Anna Karina. Born Hanne Karin Bayer in Denmark in 1940, Karina made her way to Paris as a model when she was 17, starring in advertisements for Coca-Cola, Pepsodent and Palmolive soap. It was the latter, of Karina in a bathtub filled with bubbles, that caught the eye of Jean-Luc Godard, an iconoclastic film critic on the verge of making his debut feature.

Godard auditioned Karina for that movie, Breathless (1960), but the model turned the director down when she learned the part required nudity. Godard persisted: But, you were naked in the tub.

No, Karina replied coyly, you just thought I was.

Godard was smitten. He could barely put the finishing touches on Breathless before starting work on his second film, Le petit soldat (1963) — a story of espionage in the Algerian War — featuring Karina in her debut role. The two married in 1961 and went on to make eight films together, arguably one of the most fruitful collaborations in all of cinema.

Of all their collaborations, Le petit soldat (The Little Soldier) might be the least well known. Partly because the film was banned in France for three years for depictions of torture, and partly because a good quality transfer was hard to come by in the states. Le petit soldat’s legacy waned as Godard and Karina’s stature rose throughout the years. Movies like Vivre sa vie and Band of Outsiders were restored, made the repertory rounds, and were extensively written about and taught in film classes. Le petit soldat, on the other hand, slipped further into cinematic obscurity.

Thankfully, The Criterion Collection has put together a gorgeous high-definition restoration of the film — approved by cinematographer Raoul Coutard — so a new generation can discover Karina with fresh eyes. From her inauspicious entrance at the two-minute mark to the lengthy bedroom scenes where you can practically feel Godard fall in love. He can’t help himself, dropping references to both Karina and Coutard into the dialogue: “When you photograph a face, you photograph the soul behind it.”

There were many faces of the French New Wave, but none as effervescent as Karina’s. As Godard became obsessed with philosophical aesthetics and political conflicts, Karina’s playful demeanor grounded his films. As the two fought and eventually divorced, she provided the tonic to his ego. The two separated for good in 1967.

Karina continued to act, making 30-plus films — including two of her own direction — and penning four novels. Godard also continued to work, but that’s a story for another day. For now, Karina’s visage continues to burn bright as the cinema flickers on. And despite the grim subject matter, and Godard’s paradoxical approach to it, Le petit soldat is a wonderful film, full of life and romance, captured in Coutard’s phenomenal black and white cinematography. Coutard died too, by the way: In 2016, at the age of 92. C’est la vie.

ON THE BILL: Criterion’s high-definition restoration of Le petit soldat is now available on Blu-ray/DVD, and streaming on The Criterion Channel.