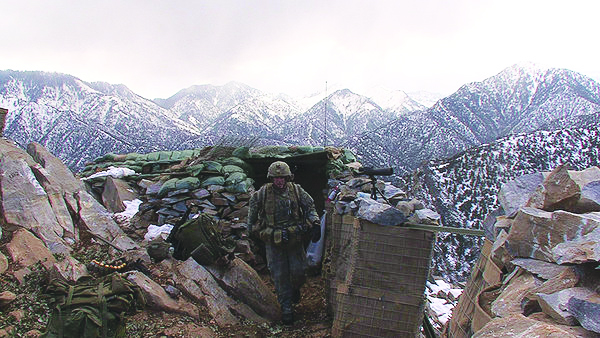 From May 2007 to July 2008, directors Sebastian Junger and Tim Hetherington were embedded in the Korengal Valley to document U.S. troops stationed at the base, Restrepo. Their 2010 documentary, Restrepo, was a breathtaking portrayal of what war feels like, and it earned Junger and Hetherington an Oscar nomination for their efforts. Now, without any studio or broadcast backing, Junger — Hetherington died covering the conflict in Libya in 2011 — returns to Restrepo’s unused footage and crafts a worthy companion piece, Korengal, which opens at the Chez Artiste in Denver on July 4. As an added bonus, a member of Battle Company, Jason Mace, will host a Q&A on Saturday, July 5, following the 7 p.m. showing.

Restrepo is located in the Korengal Valley in Afghanistan, home to two major trafficking routes used by the Taliban.

And come they do. The soldiers of Restrepo take fire every single day of the year. Forty-two American servicemen, as well as many Afghan soldiers, have died in that valley, earning it the nickname “The Valley of Death.” Fittingly, the base Restrepo was named after one of the fallen, Juan Restrepo.

While Restrepo was a documentary about a war, Korengal is the oral history of those who fought that war. There is Specialist Kyle Steiner, who survived a bullet striking his helmet, and then recognized and celebrated his brush with death with tattoos of bullets carried by angel wings on his chest. Another soldier, Sergeant Brendan O’Byrne, is far too somber to celebrate. He knows that his actions have condemned him to Hell, and the agony he feels is the knowledge that he did this to himself. People tell him, “You did what you had to do,” but O’Byrne bristles at the implication. “I didn’t have to go in the Army. I didn’t have to become airborne infantry, I didn’t have to do any of that. But I did. […] Is that what God’s gonna say? ‘You did what you had to do.’ Punch you on the shoulder and say, ‘Welcome to Heaven’? I don’t think so.”

The French filmmaker and critic François Truffaut famously stated that it was impossible to make an anti-war film, “for to show something is to ennoble it.” Junger and his editor, Michael Levine, smartly omit any major battle footage but include snippets from skirmishes. These moments, and how the soldiers react during battle, play in direct contrast to the interview footage that was taken post-deployment. With guns in their hands, they laugh, swear and taunt fate. In the interviews, they show remorse, guilt, shame and bafflement. Korengal is neither pro-war nor anti-war. If Junger has a political opinion about this war, he has kept it to himself. Instead, Korengal shows the tortuous connection between the warrior and the war they fight.

Those guys are what Korengal is about.

A 40-year-old father’s life is complicated when the mother of his two children moves to New York. Since he can’t bear them growing up far away from him, he decides to move there as well, and also fathers a child for his lesbian friends, marries a Chinese woman for a green card and falls back in love with an old flame. Starring Romain Duris and Audrey Tautou. At Boedecker. — Boedecker Theater

This crowdfunded documentary, which follows the money behind the rise of the Tea Party, almost didn’t get made when public television officials pulled $150,000 in funds they had committed. They were afraid to lose the financial backing of major PBS donor David Koch. It became its own example of the issue it covered: how difficult it can be to stand up to political money in American “democracy.” At Boedecker. — Boedecker Theater

Silent film starring Clara Bow and featuring live musical accompaniment by Hank Troy, piano. Clara Bow plays a shop girl named Betty Lou who has designs on Cyrus Waltham, the handsome owner of the department store where she works. Waltham, though, doesn’t even know Betty Lou is around. In hopes of attracting Waltham’s attention, she accepts a date with his best friend under the condition that they dine at the Ritz, where Waltham also has a dinner date. Her plan works. In no time she and Waltham contemplate marriage. The romance cools when a newspaper reporter mistakenly writes a story depicting Betty Lou as an unwed mother. It (1925) turned Clara Bow from a movie star into a legend. The term “it girl” has since entered the cultural lexicon. The picture was considered lost for many years, but a nitrate-copy was found in Prague in the 1960s. In 2001, It was selected for preservation in the United States National Film Registry. It broke box office records and critics praised its star as “a joy to behold.”

Follow six brilliant scientists during the launch of the Large Hadron Collider, marking the start of the biggest and most expensive experiment in the history of the planet and pushing the edge of human innovation. As they seek to unravel the mysteries of the universe, 10,000 scientists from more than 100 countries joined forces in pursuit of a single goal: to recreate conditions that existed just moments after the Big Bang and find the Higgs boson, potentially explaining the origin of all matter. At Boedecker.

WE ARE THE BEST

In this adaptation of the graphic novel, three young misfits growing up in early ’80s Stockholm decide to form a punk band — despite not having any instruments and being told by everyone that punk is dead. This fun movie will reach audiences of all ages and persuasions. At Boedecker. — Boedecker Theater