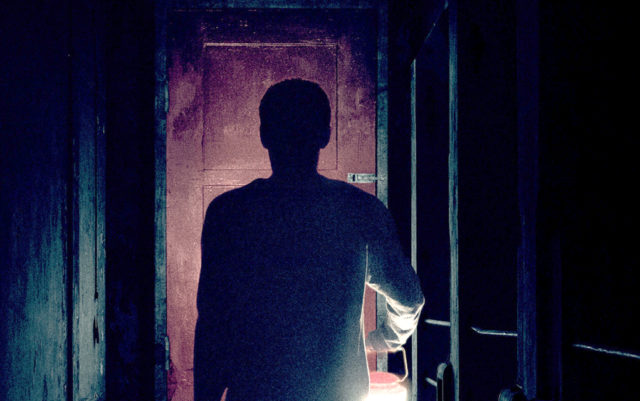 Everything about It Comes at Night is frickin’ uncomfortable. From the unfathomable interpersonal horror at the film’s center to the way everyone is all tired and sweaty and has to keep, you know, burning the bodies of recently deceased family members, the movie is the first thing that made me think, “OK fine, maybe America in 2017 isn’t the literal worst.” Writer/director Trey Edward Schults knows that good apocalyptic fiction makes you ask, “What would I do to survive?” but the genre’s best gives you absolutely no morally acceptable answers to that question. And what’s more fun right now than escapism that reminds you to trust no one and we’re all gonna die, right?!

Paul (Joel Edgerton) and his wife, Sarah (Carmen Ejogo), and son, Travis (Kelvin Harrison Jr.), are trying to survive a highly contagious plague that’s wiping humanity off of the map. Holed up in a boarded-up home with a good supply of drinking water, endless firewood around them and a loveable pupper, the trio fakes normalcy while knowing inside that it will never, ever return. Then Will (Christopher Abbott) breaks into their home, looking for supplies.

Will claims to have a wife and son waiting for his return. Sarah and Paul go round and round reasonably discussing all potential scenarios and subsequent actions they could take. What unfolds is not the “something goes bump in the night” nonsense the title and trailers suggest, but a complex, gut-wrenching sequence of events that will leave everyone who watches feeling super-icky-awful-gross. The beauty is in the horror, which is far less about the unspeakable sickness and far more about how both fragile and unbreakable human bonds are and how understandable the most unthinkable actions can be.

Edgerton, who is prone to either gruff overacting or being completely nonpresent, is a tremendous ball of fatherly coiled fury. Ejogo and Harrison ably humanize his obsessive protection, helping Paul feel less like the gun-toting redneck relative who buys you camo sweatpants for Christmas and more like Pa from Little House on the Prairie. Abbott is equally compelling as the unreadable stranger who deserves either heartfelt pity or both barrels of buckshot.

But what makes the movie work best is the effective pacing. The run time barely bumps an hour and a half; any longer would have felt either cruel or boring. The horror elements, which are wisely relegated mostly to hallucinatory moments, aren’t simple “jump scares for the sake of BOO!” They serve to heighten the larger stakes without ever having the action breach the borders of the home and immediate surroundings. Much as we no longer need every superhero movie to contain an origin sequence, we no longer require the origins of an apocalypse to recognize the end of days are at hand.

Get Out cunningly demonstrates the horror of modern racism, and It Comes at Night celebrates paranoia while making our collective extinction seem quietly inevitable. How apropos that the two best films of the year thus far are designed to scare the living shit out of us?