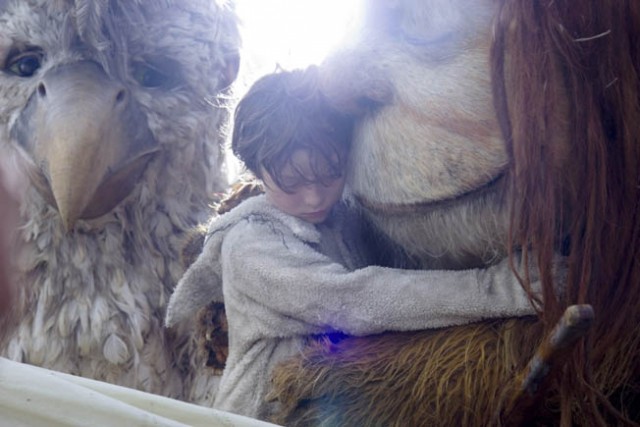 Truly, I am madly, deeply in love with the film version of Where the Wild Things Are. Not since Robert Altman took on Popeye a generation ago, and lost, has a major director addressed such a well-loved, all-ages title. This time everything works, from tip to tail, from the moment in the prologue at which director Spike Jonze freezes the action (Max, fork in hand, tearing after the family dog) to the final scene’s hard-won reconnection between Max and his mother at the kitchen table. Warner Bros. Pictures should be applauded for such a nervy and breathtaking achievement — the rare adaptation that goes deeper, not dumber, in its page-to-screen translation of a children’s classic.

Not everyone will share my feelings. I suspect kids will go for it more than their parents; in my experience, it’s parents who tend to get fussed up about material they perceive, often wrongly, as “too dark” or difficult. There’s a certain amount of pain in Where the Wild Things Are, but it’s completely earned. The movie fills you with all sorts of feelings, and I suspect children will recognize those feelings as their own.

A movie such as Disney/Pixar’s Up (which I also love — what are the odds of getting two such gems, different as they are, in the same year?) ensures mass-audience appeal of a certain economic impact, by dint of its own canny approach to blockbuster machinery and some inspired reconfigurations of hardy formulas. Where the Wild Things Are is a different sort of great. It’s take-itor-leave-it great — scruffier, lower-key. Despite reports of nervous studio meddling, it offers the same wealth of dream-catcher, off-kilter magic as did Jonze’s earlier features, Being John Malkovich and Adaptation. The film engages Maurice Sendak’s 1963 storybook, all 338 words long, in a cinematic conversation, striking minor chords and plaintive emotions where other directors would’ve gone for the throat.

On paper, the additions to Sendak’s skeletal story don’t sound so good. Max, played with a fine mixture of petulance and vulnerability by the very aptly named Max Records, is shown early on coping with life in a household unsteadied by divorce. A snowball fight with his older sister and her friends takes a sad turn (though the sister isn’t demonized or caricatured, the way such supporting characters usually are on-screen). A distraught Max turns violent with his mother (Catherine Keener, excellent). Instead of the jungle emerging from the magically changed confines of his bedroom, as in Sendak’s original, Max runs away, finds his boat and sets sail. He lands on an island where the Wild Things live, and fight and wrestle with the same neighborhoodclique issues, rousing games and hurt feelings Max deals with back home.

How did Jonze and fellow screenwriter Dave Eggers do it? How did they manage to amplify such a simple story without falling into the expository traps sprung by the egregious live-action Dr. Seuss adaptations? Mainly, they have taste and wit and trust on their side. The movie understands Max and the complicated inner lives of all kids. James Gandolfini provides the voice of Max’s main Thing, named Carol, whose temper and insecurities mirror Max’s own. Actors as rangy as Catherine O’Hara, Forest Whitaker and Lauren Ambrose, voicing Carol’s fellow creatures, develop personalities of unusual detail and unexpected emotion.

Jonze has cited the rough-hewn films of John Cassavetes as a key influence on this picture, and when you hear the muttered conversations between the Wild Things, or the breathless construction projects initiated by Max and Carol (“We’ll have a laboratory where we can build robots to do our work for us. … We’ll have our own detective agency”), you know what he’s talking about.

Shot in and near Melbourne, Australia, against an array of rumpus-friendly landscapes, the film parallels Max’s worlds, the one back home and the scarier one where anything goes. It’s never easy negotiating family or friends, as Max learns. Without a hint of didacticism, Jonze and company teach their antihero in the wolf suit a lesson, but not the sort of lesson Hollywood usually throws at an audience. This one’s more elusive and allusive and magical. The magic can be as simple as the wet, shiny nose on Carol’s face, or as disarming as the monstrously large dog, seen in a single long shot, in a Little Prince-like desert sequence wherein Max and Carol discuss their kingdom and what’s to be done with it.

I suppose I wish Jonze had found a way to keep the bedroom-transformation conceit found in Sendak’s original. His movie won’t be everyone’s ideal Wild Things. It’s something more valuable — his and his alone.