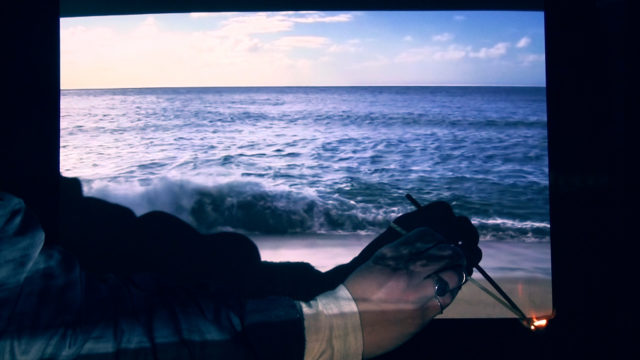 The film What We Shared, playing the 2022 Mimesis Documentary Festival (MDF) on Aug. 5, follows seven inhabitants of Abkhazia, a de facto independent state located along the Black Sea. What We Shared is an auto-fiction. In it, an unreliable narrator (Kuc) lets fractured and manipulated images collide with faded memories and vivid dreams of displacement.

What We Shared is like a spiritual sibling to the works of Maya Deren and Firouzeh Khosrovani’s 2020 Radiograph of a Family. And that it’s playing in MDF’s doc block, Upstream, alongside Echolocation—fractured still images about a family picnic and the death of a mother—and Water & Wall, which observes the previous civilization’s artifacts found on the island of Manhattan, speaks to the depth of MDF’s line-up. Everything here falls under the umbrella of documentary. Some are memoirs, others investigations. A few are essays. Most use observation as a primary tool, but a few aim for impression. Some are linear. Others are so fractured it’s hard to tell where the story ends and begins. And if any of that matters.

Back for a third year, MDF screens Aug. 2-7 at the Dairy Arts Center and CU Boulder’s B2 Center for Media, Arts & Performance. The festival is a nonprofit project of CU’s Center for Documentary and Ethnographic Media. The aim is to promote Colorado’s place in the documentary community. They do good work, and it’s getting better with each festival.

This year’s fest opens with Emma Baiada and Nicolas Snyder’s debut feature, Song of Salt (Aug. 2), about the small community of Trona, California. Trona used to be larger: Established in 1913 as a mining town, Trona grew to nearly 7,000 residents, most of which worked for the mine. But then came the 1980s, and with it, automation. The first round of layoffs happened in ’82, and Trona has since shrunk to 1,200. Those numbers continue to dwindle into a town so small you can’t even fart without everyone knowing—as one resident puts it.

The vanishing of America’s small towns and the displacement of the residents, with many living on the margins of financial stability, shouldn’t be news to anyone. But Baiada and Snyder’s coup isn’t a “ripped from the headlines” story but an empathetic observation of people and their challenges. It’s a humbling piece of work, beautifully photographed and presented.

Others to check out: Belgrade-born Iva Radivojević is this year’s artist-in-residence and will conduct a masterclass and present her 2021 work, Aleph. Pas de Deux, Elie Aufseesser’s direct cinema study of an Olympic hopeful, will close out the festival on Aug. 7. But the majority of MDF is given over to documentary blocks, 14 in all, exploring connecting themes through a collection of short and feature-length subjects. Of these, I have seen about a dozen, and they are some of the best works I’ve encountered all year. The Upstream block is a must (Aug. 5), but Forked Tongue (Aug. 6) also has plenty to dig into—including a short from CU’s Kelly Sears, which is always cause for celebration.

For more movie reviews, tune into After Image Fridays at 3 p.m., on KGNU: 88.5 FM and online at kgnu.org. Email: editorial@boulderweekly.com.