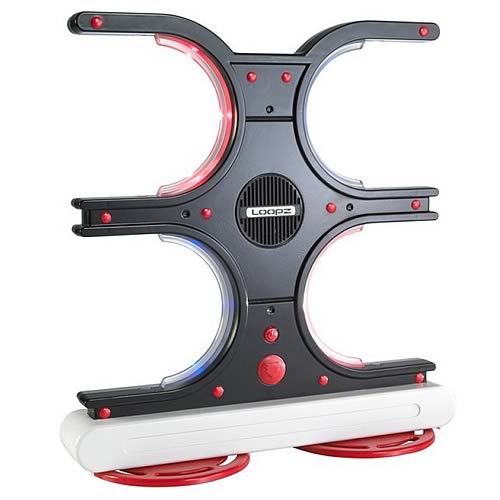 In 2010 most kids have at least one video game system. Whether it’s a Nintendo DS or Sony PSP, a Wii, PS3 or Xbox 360, video games seem to dominate a considerable amount of a kid’s leisure time. You don’t often see kids playing with board games and toys like they did in the 70’s and 80’s. Gone are memory games like Simon or electronic handheld games like Merlin but it appears that legendary game maker Mattel is trying to elbow its way back into a world ruled by video games.

Loopz is a new game from Mattel that brings that old school memory game flavor with a 21st century twist. The game is a tower of sorts with four “loops” that runs on four AA batteries with a decent sounding speaker in the middle of it. In the loops are motion detectors that that respond to the movement of your hands. Pretty interactive, eh?

Loopz has seven games or modes in it. The first game, “Repeat the Beat,” is a take of Mattel’s classic game Simon. Using your hands, you just repeat the pattern of  lights and sounds, with each level getting a bit tougher. The game “Rhythm and Flow,” has a bit of a Dance Dance Revolution feel to it where you wave your hands through the lit loops, in a rhythmic manner to keep the song going. “Versus Mode” is a two-person version of “Repeat the Beat” where players take turns on building and repeating a pattern and “Reflex Master,” has you “tagging” the lit up loops as quickly as possible before time runs out. The other three modes, “Musicology,” “Freestyle DJ,” and “Music Studio,” has the player building, remixing and using Loopz like a musical instrument with the sounds already built into the game.

The games, for the most part, are fun. It conjures up some of that “back-in-the-day” memories but is still relevant for 2010. If there was a gripe, at times it seems as though the motion detectors in the loops don’t “detect” the hand movements. Even if you are right in time with the lights, the music and the rhythm, it’ll still count as a miss. There’s no sure-fire way to combat this except to maybe just swallow your pride and keep it moving. But for $29.99, it’s good price for some entertaining diversions or competition, and definitely cheaper than your average video game.

Check out 3OH!3 having fun with the game: