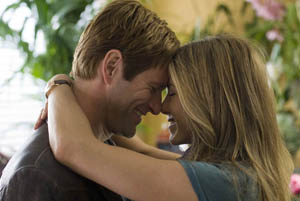 Imagine experiencing a tragic loss and coping with that by writing a heartfelt journal that, through a series of coincidences, turns into a national best-selling book on dealing with grief. Before you know it, you find yourself a self-help guru running workshops throughout the United States, even as you still have a niggling feeling that you haven’t really dealt with all the emotions related to your own loss.

That’s the situation in which Burke Ryan, Ph.D., (Aaron Eckhart) finds himself in after his wife dies in a terrible car accident and he’s leading “A-OK!” workshops to help others deal with the loss of a loved one. With the ceaseless promotion of his business partner and agent Lane (Dan Fogler), Burke is portrayed as a rock star, uncertainly standing out in the hallway while listening to his glowing introduction. Intro over, he bursts through the door and runs to the stage, grinning and glad-handing audience members.

Predictably, he meets local florist Eloise ( Jennifer Aniston), finds her physically attractive and pursues her in a particularly clumsy manner. Then it’s the clich boymeets-girl, girl-spurns-boy, boy pursues, girl warms up to boy, happily ever after, yadda yadda. You know the drill.

While I’d like to say that Love Happens was a warm, romantic film, it was in fact more of an exercise in how many trite romantic film clichs can be stuffed into a single movie and a demonstration of how sometimes typecasting doesn’t work very well: Eckhart was boring and unbelievable, and Anniston was, by God, the same role she’s played since she was on Friends.

How clich is the movie? Well, the persistent metaphor is “when life gives you lemons, make lemonade,” and it appears in various ways in the film, starting with an opening scene of Burke slicing lemons in a very chic kitchen, a bottle of vodka close at hand.

Eloise runs a little downtown Seattle flower shop called “Eloise’s Garden,” she drives a cute little Ford Falcon, and when the film starts she’s dating a grunge guitar maker who has an affair, leaving lipstick-covered wine glasses in the middle of his shop for her to find the next morning. He’s then conveniently out of the running, and Eloise and her shop assistant Marty (an amusing Judy Greer) are free to muse about the challenges of dating and finding a trustworthy, reliable, honest man.

Since Burke and Eloise are a pretty uninteresting couple, I looked to supporting roles for something fun in the film and found it both with Marty and with Burke’s father-in-law (Martin Sheen). Marty had a number of good lines, for example when she was practicing some slam poetry by (hilariously) reciting it to an elderly flower shop patron. Sheen didn’t have much of a role, but he did a good job of being the angry older man and added some retro star power to the cast overall.

One of the grief workshop participants, Walter (well-played by John Carroll Lynch), was an interesting character, having completely shut down after the accidental death of his 12-yearold son. His journey somewhat paralleled Burke’s experiences in the film, but where Eckhart couldn’t emote at all, Lynch was quite believable as an angry, hurt father, baffled by the loss of his much loved son.

Ultimately, Love Happens is an oft-told tale about who heals the healer, and there’s not much fresh or engaging about the film. There were good exteriors of Seattle and some amusing banter between Burke and Eloise, but not enough to make the film work.