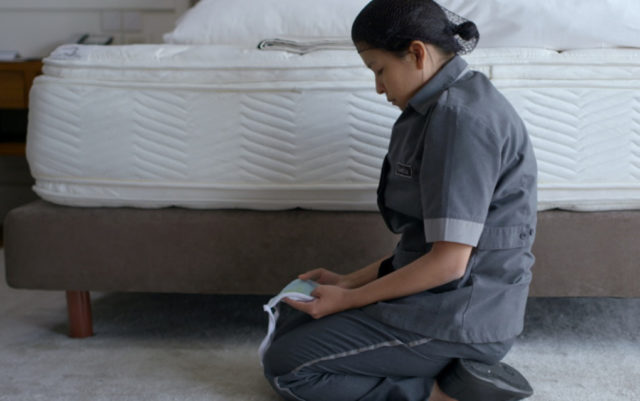 Luxury hotels are bizarre, magical places. They are like hermetically sealed chambers where every possible amenity has been accounted for: Food, drink, entertainment, even pieces of art dot endless hallways of carpet and soft lighting. Muzak plays in the background. Massive HVAC systems recycle temperature-controlled air. And the best ones don’t even hint at the possibility of refuse; unwanted food and rubbish are whisked away without a second thought.

And if you leave your room early enough and don’t return until dinnertime, you will find your room in two completely different states: first disheveled, then spotless. Only if you decide to sleep in or come back early will you see the hotel fairies expunging waste and producing purity. Many are women, most are migrant, and almost all of them are maneuvering impossibly large carts brimming with fresh linens, towels, toiletries, amenities and heaping bags of garbage.

Eve (Gabriela Cartol) is one such woman. She is 24 years old, unmarried and with a 4-year-old son at home. She works long hours and seldom sees him. Or anyone else, for that matter. When a teacher tasked with preparing the hotel staff for GED testing asks Eve what she does on her own time, she doesn’t have an answer.

Eve is a steward of the hotel, and for the nearly 100 minutes of The Chambermaid, she doesn’t leave. Instead, Eve is surrounded by an overbearing whiteness. The sheets are white. The walls are white. The towels are white. Everywhere Eve goes, sterility surrounds her. In one brief moment, Eve ventures up to the hotel’s helipad, only to find the sky completely white, its brilliant blue hue smothered by haze and amorphous clouds.

All of it gorgeously captured in anamorphic widescreen by director Lila Avilés and cinematographer Carlos Rossini. Their framing device gives Eve’s life one of cinematic importance, but it also plays a trick on us. The spaces Eve does not fill allows for a certain amount of emptiness, stillness and order. It’s calming at first, and as Eve performs her duties with the silence of a monk, the frame gives the impression that there might be sanctuary here. At this point, Eve thinks so too. There is the chance that if Eve works hard enough, she will secure a position on the coveted 42nd floor. But as the work drags on, that empty frame gives way to Eve’s isolation. She is alone, and though others constantly promise to help her, take her elsewhere, or promote her, reality holds no such hope.

The Chambermaid isn’t an ode to the hotel fairies that empty your trash, fluff your pillows or flatten your sheets while you’re on vacation. That would be too didactic. Nor is it an exposé of the backroom dealings, alliances and petty squabbles of hotel staff. Instead, The Chambermaid is about Eve, appropriately named, and the crushing reality that no matter what she came here for, she might not get it.