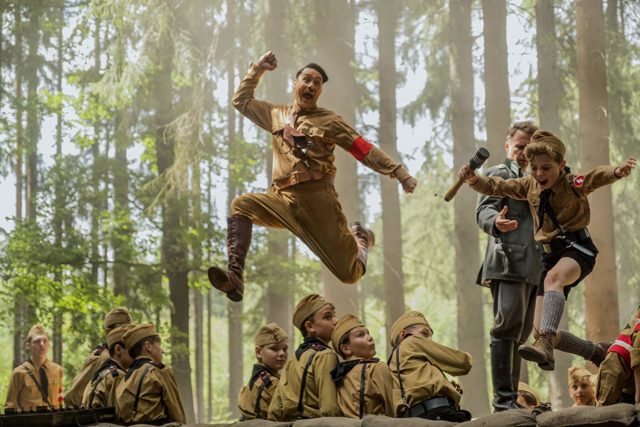 Jojo (Roman Griffin Davis) is a good little Nazi. Jojo’s only 10 years old, but his brown shirt is spiffy, his red arm badge is on straight, his arm is at the proper height for a good, strong heil — no flimsy heils here thank you very much — and his bedroom walls are covered with posters of his hero: Germany’s Furor, Adolf Hitler.

Hitler is much more than Jojo’s hero; he’s his friend, albeit imaginary. Probably for the best, considering Jojo’s imaginary Hitler is a bit on the doughy side and has a hard time hiding a Maori accent behind his cartoonish German phrasings.

Therein lies the hook of the new period comedy, Jojo Rabbit from New Zealand filmmaker Taika Waititi. Adapted from Christine Leunens’ 2008 novel, Caging Skies, Waititi mines moral quandary and childhood loneliness amidst one of the 20th century’s most recognizable conflicts. In a short video preceding the movie, Waititi, who also plays Hitler, addresses the audience about his desire to make Jojo Rabbit. Poking fun at monsters is one reason. The other, he hopes, is to spread a message of kindness.

Why open a movie with the director handing you the message on a silver platter? Maybe because distributors Fox Searchlight are skittish about a movie that seems to — at least for a little while — be pro-Nazi. They needn’t worry; there is little in Jojo Rabbit that is pro-Nazi or genuinely anti-Semitic. Anyone who might be confused as to what Jojo Rabbit is trying to say has to be asleep, with blindfolds on, and fingers in their ears.

Jojo Rabbit is far from the first time movies have made buffoons of German bogeymen. Some, The Great Dictator and To Be or Not To Be, are bona fide classics. But those movies were made during the height of the Reich. Waititi’s Jojo Rabbit is 74 years removed from the fall of Nazi Germany. It feels safe. And a little smug.

More problematic is Waititi’s love for his actors. No matter how repugnant a character is required to be, Waititi allows the actor plenty of laughs and a heart-warming moment or two. Take Captain Klenzendorf (Sam Rockwell), a one-eyed, alcoholic captain who gets to save the day by acting vile towards Jojo. Waititi’s Hitler suffers a similar problem: He’s too cartoonish, too goofy, to be taken seriously when he starts to pivot toward menace.

And yet, Jojo Rabbit is an enjoyable, funny movie for most of its 108 minutes. Jojo’s friend, Yorki (Archie Yates), looks like a German Charlie Brown and has the voice to match. Rebel Wilson’s Fraulein Rahm is a wrecking ball of national pride and impulsive action. Scarlett Johansson, as Jojo’s Mom, gives the movie heart. But Jojo Rabbit’s soul belongs to Elsa (Thomasin McKenzie) — her entrance is a hilarious cinematic twist on the horror genre.

Though Elsa’s entrance is an inspired bit, it inadvertently highlights what’s wrong with the rest of Jojo Rabbit: As the end nears, the movie stops twisting and hopes you’re still laughing.