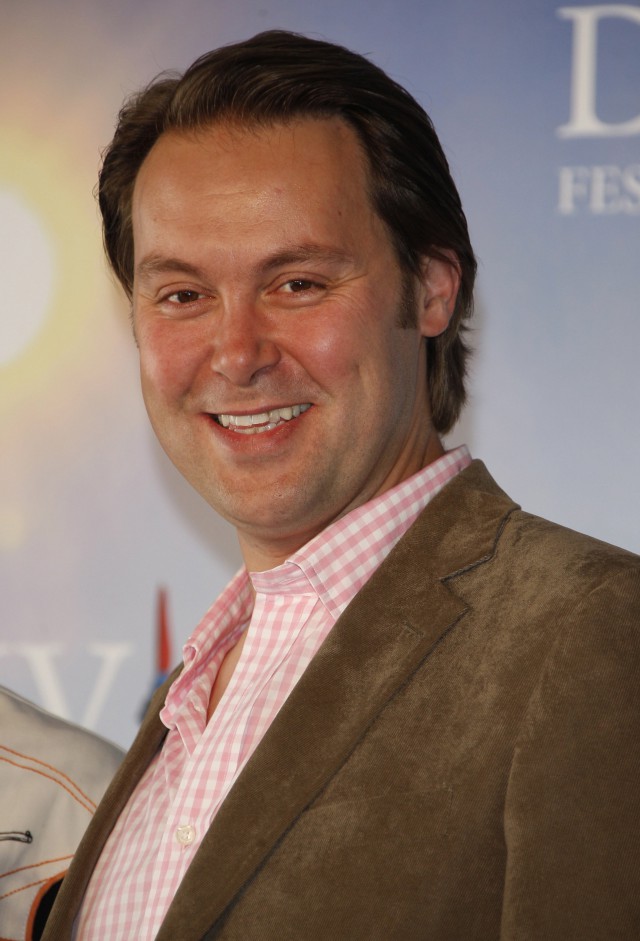 “Me and Orson Welles” is a little velvet sack of
diamonds. It’s a sparkling love letter to a gigantic talent, a romance, a
comedy, a drama. Above all it’s a tale of puberty, the period between childhood
and adulthood for both of its title characters, and for America. The story is
retro but the subject matter is familiar to indie director Richard Linklater
(“Dazed and Confused,” “School of Rock” and “Before
Sunset”).

The film is set in 1937, as Welles, the boy wonder of radio
plays and theater, prepares to stage “Julius Caesar.” Zac Efron, a
17-year-old actor bored to extinction with his high school drama class, plays
hooky in Manhattan, meets the showman on the street and lands a bit part.

There’s news of the war in Europe on the radio, and Welles
intends to make “Caesar” a revolutionary modern-dress commentary on
fascism. The troupe’s producer frets about deadlines and funding, the cast and
orchestra are frustrated by Welles’ constant revisions. But as opening night
approaches, the crises energize everyone. With Welles as the whip-cracking
ringmaster they work together in euphoric harmony.

The strongest source of tension is offstage. The actors,
actresses and office staff are performing a bedroom farce of their own. Claire
Danes plays a secretary for the company whose intelligence, loyalty and cool
elegance make her the perfect employee for the chaotic Mercury Theater. Efron
courts her with the helplessness of a young man who believes he is in love but
knows nothing of the practical side of courtships. Welles, a world-class
philanderer, can go from an introduction to a smoothly executed pickup in under
a minute. He’s a man in a hurry, after all, traveling across Manhattan in an
ambulance to beat the traffic.

Linklater directs with a wonderful lightness of touch. He
doesn’t labor over introducing the big cast of characters. We learn their
identities and their place in the hierarchy as we go along. Cameraman Bill Pope
shoots clear, strong images free from any hokey patina of age. The script is
literate and restrained, a neatly arranged composition of wry humor and
melancholy.

Efron takes a step here from pinup status to actor, but the
real story is Christian McKay, a British stage actor who has played Welles for
years in one-man shows. His film debut is a triumph. At 36, he’s a bit old;
Welles was a wunderkind of 22 when he set New York on its ear with
“Caesar.” Nevertheless, McKay strongly resembles the young Welles and
brilliantly captures the measure of the man.

He sees everyone as an audience, to be seduced or taken by
force. When he focuses on someone it’s as if the rotating lamp of a lighthouse
has paused to shine on that person alone. McKay understands the rebellious,
wounded orphan behind the emotionally isolated genius; Welles’ two great films,
“Citizen Kane” and “The Magnificent Ambersons,” are about
celebrated men trying to recapture the hope, safety and security of their
childhoods. From the cadences of that hypnotic voice to the lightning bolts of
inspiration to the frequent look of a schoolboy pulling a naughty prank, McKay
nails his performance to the back wall of the theater.

It helps to know something about history and Welles’s career
to get the most from this film. When “Caesar” slays ’em, McKay crows,
“How will I top this?” With the “War of the Worlds”
broadcast and “Kane” just over the horizon, it’s a great inside joke
for culture vultures. And when Efron walks off into what looks like a happy
ending, it helps to remember how soon that faraway war on the radio would hit
home.

Me and Orson Welles