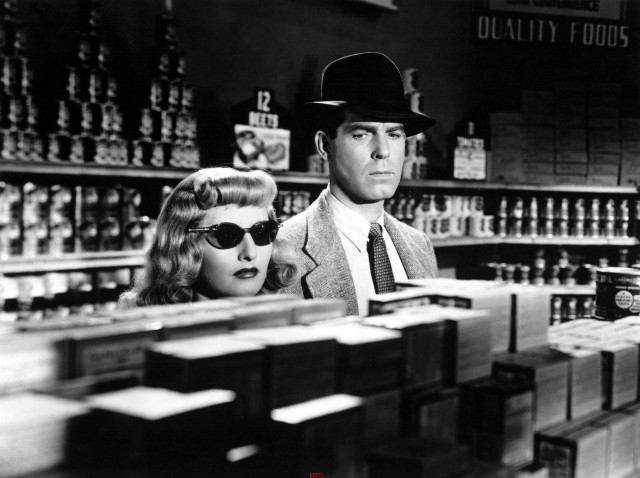 Film noir gained popularity in the early 1940s, just as America entered the war and the moviegoing public was looking for something darker to sink their teeth into. Lucky for them, Hollywood recently gained an influx of European émigrés fleeing the Nazi Party. They brought with them psychological burden courtesy of a war-torn home, along with a tradition of German expressionism and chiaroscuro lighting.

This sets the stage for Paramount’s 1944 release, Double Indemnity, which will screen Sunday, June 13th at The Boedecker Theater. Austrian-born Billy Wilder fled Europe in 1933 and started his career as a screenwriter before moving into the director’s chair with The Major and the Minor (1942). A year later, he hired the novelist Raymond Chandler — famous for the Philip Marlowe series — to help adapt James M. Cain’s novella Double Indemnity. Chandler and Wilder did away with Cain’s complicated ending and expand ed the relationship between the two male leads and the movie was released in 1944. Film noir, as well as Wilder’s career, fully arrived.

Double Indemnity is about love, money and murder — but not necessarily in that order. It’s about three people, insurance salesman Walter Neff (Fred MacMurray), Keyes (Edward G. Robinson) and Phyllis Dietrichson (Barbara Stanwyck). Neff is the close confidant of Keyes, a claims investigator who can sniff out a crook thanks to “the little man who lives in my stomach.” Neff pays attention — too closely — and he thinks that he might be able to cheat the system. Enter Phyllis Dietrichson, a woman with an unwanted spouse lying around. In another movie, their paths crossing might seem oddly coincidental. In film noir, it is more like predestination.

Neff concocts a plan to rub out the unwanted Mr. Dietrichson and collect the insurance money and Phyllis happily goes along. If they had just killed him, they might have gotten away with it. If they had just killed him and taken the regular insurance pay out, they might have gotten away as well, but no — this is film noir — and they have to go for the big payday. There is a clause in the claim, a payout to hook suckers, known as double indemnity: the insurance pays double if the accident happens on a train. Neff and Phyllis hop on the trolley — physically and metaphorically — and head right down the line.

Double Indemnity was made during the reign of the Hayes Code, a mediapolicing system that made sure violence was kept to a minimum, sex was dropped completely and criminals were adequately punished. Counterintuitively, these restrictions work in Double Indemnity’s favor by pushing the murder off-screen and leaving the sexual sizzle to the dialogue. Its characters don’t behave or talk like real people; they behave and talk like they grew up reading pulpy dimestore detective novels. They come up with complex plots to beat the system. But the house always wins, and they know it.

Seventy years later, Double Indemnity is still one of the best.